Why Coby White is the Chicago Bulls’ X factor

The Chicago Bulls are rolling. Currently 25-10, they own the first seed in the Eastern Conference, have an elite starting five headlined by Zach LaVine, DeMar DeRozan and Nikola Vucevic and still have room for improvement. Where does that upside come from? Third-year guard Coby White.

Previously a fixture in the Bulls’ backcourt, White has become a primary reserve due to off-season shoulder surgery and the off-season acquisition of Lonzo Ball. Despite being bounced out of the starting five, White’s recent return (he missed the first four weeks of the regular season due to rehab) and mere presence can be a game-changer for the Bulls’ Eastern Conference aspirations.

Here’s why Coby White is the Bulls’ X factor.

Coby White has been a steady scorer for the Chicago Bulls

Chicago brought in Ball because they wanted a ball-handler who could facilitate and lead the fastbreak, which he does better than White. At the same time, White has done plenty to be enthused by in his two-plus seasons in the NBA.

The University of North Carolina product can score off the dribble, get to the rack, be respectable from the perimeter and hit the boards at an impressive rate for a guard. He’s a steady player. White flashed promise off the bench in his rookie season, which was followed up by a productive second season as a starter.

He can be a reliable starter or a jolt scorer off the bench. As it concerns White’s role in the latter, he’s the perfect type of player to come off the bench on a contender. He leads the second unit in scoring while getting the ducks in a row and being another source of offense for the team altogether.

Furthermore, White could potentially be on the floor at the end of games if the Bulls choose to go with an ultra-small lineup.

Yes, the Bulls have the best record in the East. On the other hand, there’s reason to be concerned about this team’s depth, as it concerns them competing to represent the East in the NBA Finals.

Prior to White’s season debut, the Bulls’ second unit was led by Alex Caruso, Derrick Jones Jr. and Ayo Dosunmu. Caruso does a little bit of everything, Jones is an athletic finisher and Dosunmu can be an abrupt scorer. Those three, as well as the likes of Tony Bradley and Troy Brown Jr. may have an expiration date in that the starting five is having to carry the load a bit too much in the scoring department. Meanwhile, Patrick Williams’ regular season ended after five games due to a wrist injury. Enter Coby White.

The homegrown guard changes the entire dynamic of that five-man unit. White attracts the bulk of defensive attention, allowing Caruso to get points all over the floor and provide the team’s inside finishers with room to operate.

White is a godsend for the second unit. He takes the lead scoring reigns from LaVine and DeRozan, as they attempt to preserve an early lead. White makes a suspect bench corps a respectable unit. There’s also the element of the NBA’s ongoing COVID-19 outbreaks. There’s no such thing as too much depth in the sport right now. Having a starting-caliber player coming off the bench in White can pay dividends.

At the end of the day, if the Bulls are going to win the East or even a playoff series, they need everyone to be firing on all cylinders; they still haven’t competed in a playoff game as a collective unit.

Rotations are condensed in the playoffs, and White figures to be part of the Bulls’ shortened rotation. Him scoring at his career tendencies and/or becoming a more efficient shooter would enhance the Bulls’ offense in that defenses wouldn’t have minutes off, so to speak. White would be picking up where the starting backcourt leaves matters. 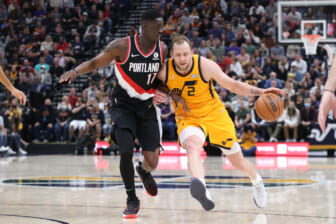 White being an effective scorer off the bench provides the Bulls with another legitimate scoring option and more offensive versatility. On the other hand, if he becomes a fraction of his old self in his new role, the weakness of this team will come back to bite them in the NBA Playoffs.

There’s no margin for error in the playoffs. Coby White can be the piece that propels the Bulls or be part of what holds them back.