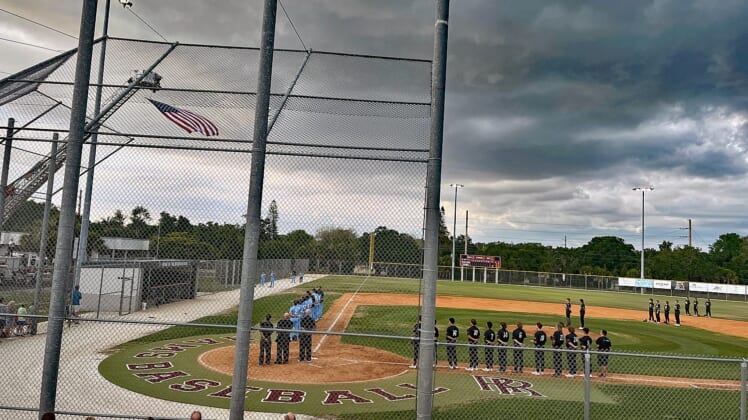 A pitcher for Texas’ Weatherford College was not happy about giving up a two-run home run in a recent game and chose violence as a reaction. Now he is being investigated by local police.

In the sixth inning — of a seven-inning junior college matchup — North Central Texas College player Josh Phillips smashed a pitch to the opposite field for a go-ahead two-run home run. Yet, that was not where things really got interesting between the school and their junior college opponents Weatherford.

In a video of the homer, as Phillips is rounding the bases it doesn’t appear as if he was slow trotting or directing any comments to pitcher Owen Woodward. Even when he hit the home run, there wasn’t a celebratory bat toss and point to his dugout that might have set a negative mood early. However, as he heads from second base to third, one of the game’s umpires can be seen pointing and gesturing to Phillips.

Weatherford College pitcher being investigated by police after attacking opponent

It is unclear what the umpire’s intentions were or if the player had said anything derogatory, nevertheless it set something off a rage in Woodward. As Phillips rounds third base the pitcher breaks into an all-out sprint. Woodward only comes to a stop after he blasts through Phillips with a shoulder tackle that looks like something out of an NFL highlight reel.

Related: Get the full rundown of the MLB games today, including best bets and DFS picks

Unsurprisingly the benches for both squads cleared but no large-scale fighting broke out between the two sides.

“The [Weatherford College] student in question will face potential disciplinary action from the Office of Student Services up to and possibly including expulsion,” the school said in a statement. “The Weatherford College Police Department is also investigating the incident and has taken statements.”

In the same statement, Weatherford’s head baseball coach Jeff Lightfoot said he was “shocked” and “disappointed” by what happened in the game earlier this week. “We do not condone this type of behavior. We have worked hard to build a program with the highest of standards. We are completely embarrassed by this incident, and we apologize to North Central Texas College and the fans of WC baseball,” Lightfoot added.