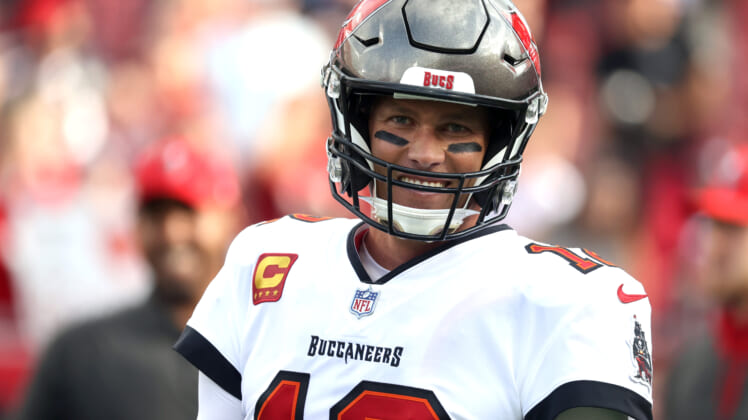 It would seem that NFL legend Tom Brady is so good-looking that NBA Hall-of-Famers Shaquille O’Neal and Charles Barkley could not help but show serious appreciation of it during an NBA on TNT broadcast.

There is no denying the football talents of Tom Brady. He is not only the greatest athlete to ever play the quarterback position in the NFL, but he is arguably the greatest to have ever played in the league at any position. Seven Super Bowl titles and 11 Pro Bowl appearances are pretty good evidence of his singular greatness.

However, along with his gifts on the gridiron, many women and men around the world cannot help but admit the dashing good looks of the Tampa Bay Buccaneers’ starting QB. It is so hard to contest, that during a recent in-studio segment for an NBA on TNT broadcast, network analysis, and NBA legends Shaquille O’Neal and Charles Barkley took a moment to laud how handsome No. 12 is in person.

The unexpected conversation started when lead anchor Ernie Johnson, Jr. brought up the topic of the love that many people have for Brady. The idea led Barkley to discuss a recent interaction with his fellow analyst, where the Los Angeles Lakers great told him about a recent dinner he had with the signal-caller. A recollection that led the fearsome O’Neal to jokingly exclaim, “Gorgis. G-O-R-G-I-S, gorgis.”

Barkley then added that when his co-worker informed him of the dinner he responded by saying, “You right, that’s a pretty man.” The Phoenix Suns legend continued by explaining how he has often gone into a bit of a trance in his own experiences when meeting Brady.

“Every time I’m around him, and he starts talking to me and I make eye contact, I don’t remember nothing of what he said,” Barkley said with a laugh and impression.

The NFL icon will officially join the sports experts and analysts fraternity, with the likes of O’Neal and Barkley, when he retires from football. Earlier this week, he inked a 10-year, $375 million deal that will pay him more than he made during his entire NFL career.