The Texas Longhorns staved off elimination and knocked out the Tennessee Volunteers with an 8-4 win on Tuesday at the College World Series in Omaha, Neb.

After Tennessee tied the game 4-4 in the fourth inning, Texas came roaring back with three runs in the bottom half. Mitchell Daly walked to lead off, and after a strikeout, Douglas Hodo III drew another walk. Another strikeout followed, but the floodgates opened with two outs. Silas Ardoin singled to right center to drive in Daly and Hodo III.

Mike Antico followed up with a single, and Cam Williams knocked in the third run of the inning with a single to left center.

The Longhorns tacked on another run in the sixth inning to make the score 8-4 thanks to Eric Kennedy doing some nifty running. After he singled with one out, he advanced to second on a groundout, stole third base and then reached home on a wild pitch.

On top of that sequence, Kennedy had a big day, going 2-for-4 with three RBIs, while Williams and Ardoin each knocked in two runs.

Tanner Witt picked up the win in relief for Texas by pitching 5 2/3 innings of scoreless, three-hit ball. 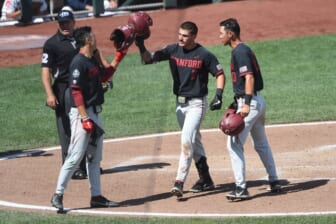 Texas will face Virginia — which lost 6-5 to Mississippi State on Tuesday night — in another elimination game Thursday.