Cole Anthony scored 31 points, rookie Franz Wagner had a career-high 28 and the Orlando Magic ended a four-game losing streak with a 115-97 comeback victory over the Minnesota Timberwolves on Monday in Minneapolis.

Anthony (14 points) and Wagner combined for 24 fourth-quarter points as Orlando outscored the Timberwolves 43-19 over the final 12 minutes. Minnesota was on top by 13 points in the second quarter and 11 late in the third.

Wagner shot 10-for-18, including 5-for-9 from beyond the arc, as the Magic salvaged one victory during its three-game road trip that included losses to the Toronto Raptors and Detroit Pistons. Wagner has reached double figures in all eight Orlando games this season.

Magic guard Jalen Suggs totaled 15 points in his return to the state of Minnesota. The fifth overall pick in the 2021 draft was born in Saint Paul and attended Minnehaha Academy in Minneapolis before he played one collegiate season at Gonzaga University.

Karl-Anthony Towns amassed 23 points and 16 rebounds and Anthony Edwards scored 24 points, but Minnesota dropped its third straight game at the Target Center and fell for the third time in four games overall. 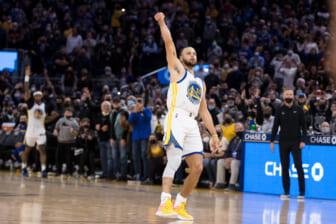 The Timberwolves, who entered the day No. 4 in the league in defensive efficiency, allowed Orlando to shoot 45.1 percent from the field and sink 17 of 43 3-point attempts (39.5 percent).

Timberwolves starting point guard D’Angelo Russell played 17 minutes before leaving the game with a right ankle sprain. He scored three points on 1-for-8 shooting and had five rebounds and three assists for Minnesota, which was also without guard Patrick Beverley (left calf soreness).

Orlando shot just 38.2 percent in the first half, but the Magic stayed within 58-53 at halftime thanks to a decided edge at the free-throw line. The Magic converted 20 of 25 free throws — compared with 2 of 4 for Minnesota — as Anthony sank nine of his 11 attempts.