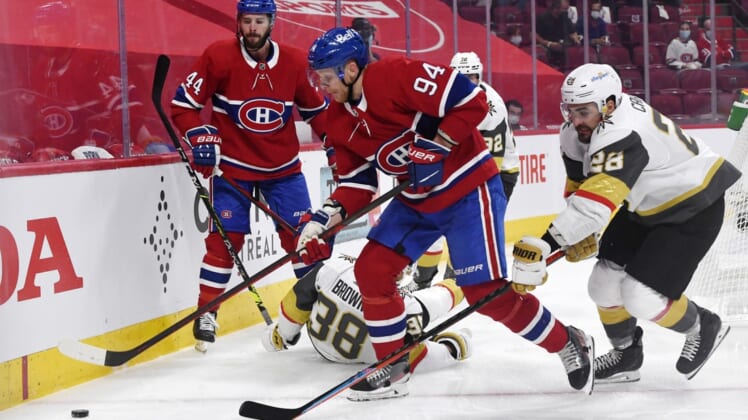 Nicolas Roy became the overtime hero with the goal that gave the visiting Vegas Golden Knights a 2-1 comeback victory over the Montreal Canadiens on Sunday and evened their Stanley Cup playoffs semifinal series.

Roy, who was at the doorstep when Max Pacioretty sent the puck to the front of the net, buried his second chance in the scramble 78 seconds into overtime.

The Golden Knights, with all of the momentum after their comeback tied the best-of-seven series at 2-2, will look to gain the upper hand when the series resumes in Las Vegas on Tuesday.

Brayden McNabb also scored for the Golden Knights, while goaltender Robin Lehner made 27 saves in a surprise start.

Paul Byron scored for the Canadiens, who were without head coach Dominique Ducharme for a second consecutive game after he tested positive for COVID-19 on Thursday. Goalie Carey Price made 19 saves. Montreal lost an overtime game for the first time in this postseason (1-4).

Shortly after the Golden Knights’ Alex Pietrangelo rang a shot off the post, Byron opened the scoring with 65 seconds remaining in the second period.

After neatly picking up Nick Suzuki’s long pass out of his skates at full speed, Byron converted on the breakaway. It’s the 11th time in 15 playoff games that the Canadiens have opened the scoring. They have a 9-2 record when scoring first. 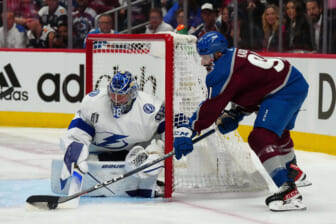 The Golden Knights finally provided some much-needed pushback after the second intermission and were rewarded when McNabb tied the game just past the midway point of the third period. McNabb pinched down from his point position for a pass from William Karlsson, and his offering squeezed past Price at the 10:37 mark of the third period.

After Marc-Andre Fleury’s costly gaffe cost the Golden Knights a late lead on Thursday, and eventually the game, Vegas coach Peter DeBoer made a bold move by giving Lehner just his second start of this year’s playoffs and he delivered.

Lehner made a glorious first-period stop on Eric Staal, while his Vegas teammates managed only four shots on goal in the opening frame.

Lehner came up with an even bigger save when he denied Cole Caufield’s breakaway attempt while it was a 1-0 game in the middle of the third period.