It should be a universal truth to not test the patience of boxing legend Mike Tyson. Unfortunately for one excited fan on a recent flight with the former heavyweight king, he must not have gotten the memo.

On Thursday, TMZ Sports reported the details and revealed phone camera footage of a physical altercation between an unidentified individual and Tyson. The beginning of the video shows a man recording his friend as he is sitting behind “Iron Mike” on a flight to Florida, and conversing with the New York native.

However, Tyson was not nearly as energetic about the conversation as the man in the video, who allegedly wanted an autograph from the semi-retired boxer. Early reports from sources close to Tyson told the outlet that he claimed the man in the video “wouldn’t stop provoking the boxer in his seat.”

Mike Tyson batters bothersome passenger on a flight to Florida

That alleged provocation led to Tyson getting up from his seat and attacking the man — as seen in the video. The end of the footage obtained by the outlet shows blood on the side of the man’s face as his friend jokes, “My boy just got beat up by Mike Tyson.”

Related: Mike Tyson next fight – Who could the boxing great face in his next exhibition bout?

TMZ Sports spoke with the person who recorded the encounter and they added further depth to the incident.

“The witness tells us Mike took a selfie with [his friend] … and then was patient with his overly excited buddy, who kept trying to talk to the 55-year-old fighter as he sat behind him. Eventually, though, we’re told Tyson had enough of the guy behind him talking in his ear … and told him to chill. When the guy didn’t, that’s when the witness says Tyson started to throw several punches at the man’s face.”

The man that got on the wrong side boxing icon reportedly received medical attention after the altercation and spoke with police about the dust-up. It is unclear if charges will be pressed. Tyson’s camp and Jet Blue, the airline for the flight, did not comment on the matter. 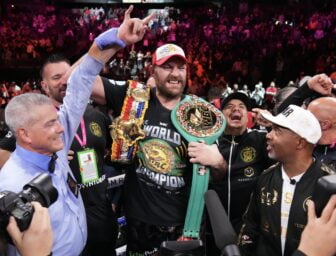