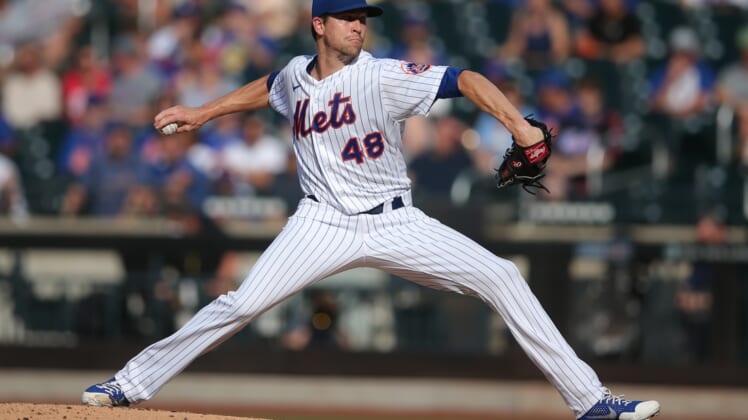 Jacob deGrom continued his historic start to the season Monday afternoon, when he allowed one hit over five scoreless innings and earned the win as the host New York Mets beat the Atlanta Braves, 4-2, in the opener of a doubleheader.

Dominic Smith laced what proved to be the decisive three-run double in the fifth for the Mets, who have won twice in their last six games. The Braves have lost eight of 12.

deGrom (7-2), who exited his previous two starts with right flexor tendonitis and right shoulder soreness, looked healthy as he authored another dominant start. The two-time National League Cy Young Award winner walked two and struck out six while lowering his ERA to 0.50.

He is the first pitcher in baseball history to allow one earned run or less in 12 consecutive starts.

deGrom was regularly clocked at 100 mph in retiring the first eight batters he faced before walking opposing pitcher Kyle Muller, who was making his first big league plate appearance. He set down the next six before issuing a four-pitch walk to Guillermo Heredia — just deGrom’s third four-pitch walk of the season — with two outs in the fifth.

deGrom’s hopes of authoring an unofficial no-hitter — no-hitters or perfect games in seven-inning doubleheaders are not recognized by Major League Baseball — then evaporated when left fielder Smith and centerfielder Albert Almora Jr. appeared to miscommunicate on a long fly ball by Kevan Smith that landed in between them and bounced over the fence.

With Heredia running on the pitch, the bounce ended up preserving deGrom’s scoreless streak, which he extended to 30 2/3 innings by getting pinch-hitter Pablo Sandoval to pop up to third.

The Braves cut the gap in half against Seth Lugo in the sixth, when Freddie Freeman drew a one-out walk and Ozzie Albies followed with a two-run homer. Lugo retired the next two batters and Edwin Diaz threw a perfect seventh for his 15th save.

Jonathan Villar built the Mets’ first run in the first, when he drew a leadoff walk, went to second on a bunt by Francisco Lindor, took third on Dominic Smith’s flyout and scored on a wild pitch.

Muller (0-1) allowed just the one run on one hit and two walks while striking out three over four innings in his first big league start.