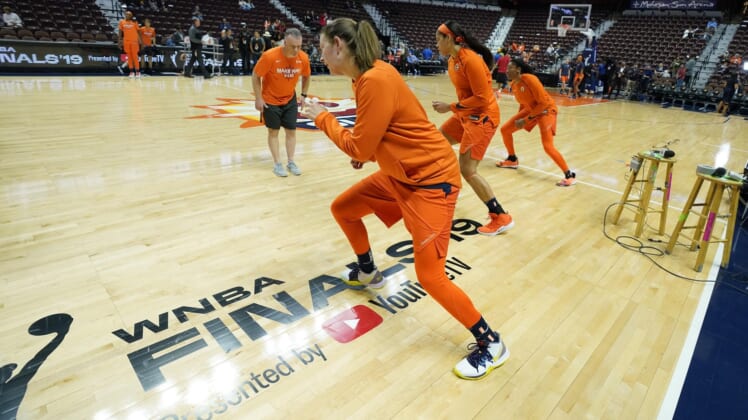 After losing two of their last three games, subsequent to ending their run as the last remaining unbeaten team in the WNBA, the Connecticut Sun get themselves back on track defeating the Las Vegas Aces, 74-67, on Tuesday.

The win puts a halt to the Aces’ three-game win streak. As a result, the Sun improve their record to 7-2 while the Aces drop to 5-3.

Both Briann January and Jasmine Thomas scored 11 points each with the latter adding six assists and four rebounds. While DeWanna Bonner had an off shooting night with just six points, she was able to impact the game in other areas, finishing with eight rebounds, five assists and three steals.

Liz Cambage had her best game of the season thus far in defeat, finishing with 28 points on 65% shooting, seven rebounds and three blocks. A’Ja Wilson finished with 14 points, six assists and five rebounds while Chelsea Gray had 10 points, five rebounds and four assists.

Three-point shooting was hard to come by for both teams in the game with the Connecticut Sun going 4-for-17 in the game while the Aces failed to convert from long range shooting 0-for-5.

After the Aces put the first points of the game on the board, the Sun took control of the first quarter leading for the majority of the opening period growing as large as seven points. They were led by Jonquel Jones who scored eight points in the first.

Both teams struggled to put the ball in the basket to start the second quarter, combining to make just one field goal through the first 3:21 of the period. After the Aces briefly took a 22-21 lead with 4:56 remaining in the half, the Sun answered by scoring eight unanswered points over the next minute.

The Aces responded by scoring six unanswered points trimming the lead to one point. At the end of the half, the Sun led 33-30.

After a stalemate third quarter that ended with the Connecticut Sun leading 52-48, the Aces scored the first six points of the fourth quarter to take a 54-52 lead. With 7:33 remaining in the final quarter, the Aces led 56-55. The Sun would then power themselves to victory, outscoring the Aces 15-5 over the next four minutes.