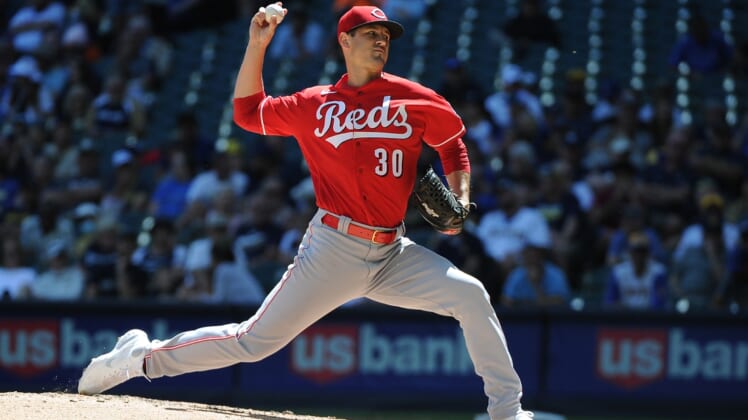 Tyler Mahle matched a career high with 12 strikeouts while Tucker Barnhart drove in a fired-up Joey Votto with the go-ahead run as the surging Cincinnati Reds edged the Milwaukee Brewers 2-1 on Wednesday to complete a second straight three-game series sweep.

Lucas Sims worked around a one-out double from pinch-hitter Willy Adames in the ninth to record his seventh save as the suddenly rejuvenated Reds bullpen shut the door on the Brewers for the final three innings.

Cincinnati won its sixth straight, its 13th in 16 games and its eighth in a row on the road. The six-game streak matches their run in the first week of the season. The eight-game road streak is their best since 2012. Milwaukee was swept at home by Cincinnati for the first time since Aug. 2009.

Mahle and Freddy Peralta took a cue from Luis Castillo and Brett Anderson the night before and went toe-to-toe in a pitchers’ duel.

Mahle (7-2) paved the way for one of his best outings of the season by wiggling out of trouble in the first when he had runners on first and third and none out and the bases loaded with one out and keeping Milwaukee off the scoreboard. Manny Pina lined out to third and Jace Peterson struck out looking to end the threat.

The Brewers finally got through against Mahle in the third when Christian Yelich singled home Daniel Vogelbach, who doubled to open the inning. After hitting Avisail Garcia, Mahle finally settled in. Mahle retired the final 12 batters he faced, striking out 12 batters for the first time since June 30, 2018, also against Milwaukee.

Peralta cruised through the first three innings, retiring all nine batters. That streak reached 11 before Nick Castellanos reached on an infield single to third in the fourth. Tyler Naquin’s two-out double tied the game, 1-1.

The Reds took the lead on another two-out rally in the seventh when Votto singled on a looping liner to center off Peralta. Barnhart’s opposite-field double down the left-field line scored Votto, who pumped his fists and yelled as he slid safely into home, beating the throw for a 2-1 Cincinnati lead.

Peralta (6-2) had his personal three-game winning streak snapped and lost for the first time since May 5. The right-hander allowed five hits and two runs over seven innings, striking out six and walking none.

Brad Brach pitched a perfect seventh before Avisail Garcia’s two-out single in the eighth against Sean Doolittle snapped a string of 17 batters retired by Reds pitching. Sims fanned pinch-hitter Omar Narvaez to send the game to the ninth.