Why the Washington Nationals’ rebuild is on a prosperous path 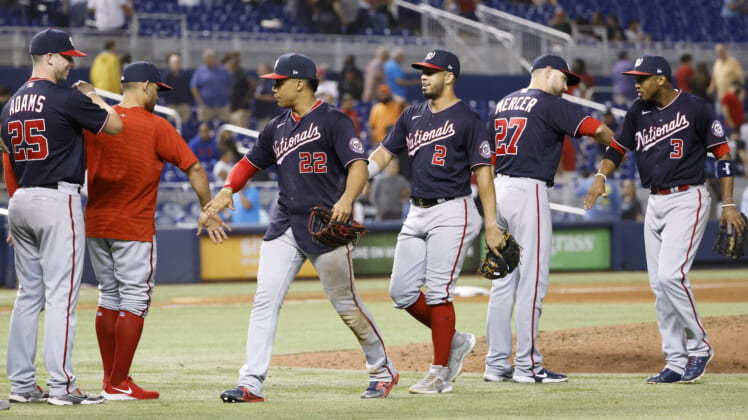 The thought of the Washington Nationals going forth with a full-fledged selling spree seemed like a highly unlikely prospect in spring training. On the contrary, they were unable to make significant headway in the standings and began losing games at a high clip before the MLB trade deadline. The selling proceeds, and the Nationals are now a rebuilding team.

Now, record-wise, the Nationals haven’t exactly been crushing it. They are 16-34 since the trade deadline. On the other hand, this is an abruptly young team with top prospects on the field and a ballclub with individuals who are showcasing their potential.

The wins and losses don’t tell the entire story or serve as an omen of what’s to come for the Nationals. Here’s why their rebuild is on a prosperous path.

Albeit the likes of Trea Turner, Kyle Schwarber, Josh Harrison, Starlin Castro and Yan Gomes are gone, the Nationals’ offense remains a respectable unit that can give a pitching staff fits.

Juan Soto is Juan Soto, that being the best left-handed hitter in baseball. First baseman Josh Bell is putting together a well-rounded season. The story down the stretch, however, has been the new recruits for manager Dave Martinez’ depth chart.

Lane Thomas, who was never able to carve out a starting role in the St. Louis Cardinals’ outfield and was traded to the Nationals for Jon Lester, has become the team’s everyday center fielder.

He’s putting the ball in play and slugging at a high level, working walks and has become the impetus for the offense in the leadoff hole. A presumed minor transaction has become highway robbery for the Nationals in that Lester likely had no future with the team past 2021.

Keibert Ruiz and Riley Adams, who were each acquired in deadline moves, have flashed an ability to be everyday catchers. Ruiz is squeezing out singles left and right over the last week, and Adams is blasting pitches into the seats.

Second baseman Luis Garcia has been hitting with more consistency of late enough to perhaps be the team’s starter at the middle infield position next season. While he’s still striking out at a high clip, Carter Kieboom is beginning to flaunt power.

The Washington Nationals’ offense entered Thursday first in MLB in walks (118), third in hits (256), sixth in batting average (.263), seventh in OPS (.778) and ninth in runs (135) over the last month. That’s extremely impressive for a unit that’s mostly made up of players with minimal MLB experience.

Washington Nationals have compelling youth in their starting rotation

Starting pitching has been the Nationals’ identity for a decade. For the first time in that span, the franchise finds itself fielding a new starting rotation.

The numbers aren’t on Josiah Gray’s side, but the 23-year-old right-hander, who was acquired along with Ruiz as part of the team’s return on Max Scherzer and Trea Turner, has shown some of the reasons why he has been one of the top prospects in MLB. He’s striking out hitters at a plausible rate and beginning to incorporate and find success with his off-speed pitches.

Top pitching prospect Cade Cavalli has been one of the best pitchers in minor-league baseball this season at multiple levels, striking out hitters with ease. He could possibly compete for a spot in the big-league rotation next season. Maybe 2019 first-rounder Jackson Rutledge cracks the big leagues at some point next season, too?

The Nationals have a sneaky development brewing in 27-year-old left-hander Josh Rogers, who has posted a 2.16 ERA across four starts. He’s pitching deep into games and is one of their better starting pitchers of late.

Rogers could be a long reliever in 2022 or crack the back end of the rotation if he continues dealing. Veteran Paolo Espino has found success as both a starter and long reliever. He too could improve their bullpen next season if retained.

Speaking of the bullpen, it’s an extremely raw unit with pitchers who have the ability to improve with more reps and a spring training under their belt such as Mason Thompson and Kyle Finnegan.

Washington Nationals’ rebuild is more of a severe retooling effort

The Nationals have a productive offense with upside. Their rotation has developing arms, gets Stephen Strasburg back next season and Patrick Corbin probably can’t be any worse than he was this season (Corbin owns a 6.17 ERA across 29 starts). This isn’t a stereotypical rebuild.

Yes, the Nationals traded away a third of their roster, which included moving a pair of elite players in Scherzer and Turner. At the same time, most of the young players they acquired in those deals are already with the big-league team or in Triple-A; they’re getting their first licks. The Nationals have something at their disposal they haven’t had in a few years: payroll flexibility.

With the team likely not pursuing a reunion with Scherzer and not having to worry about extending Turner on a mega deal, they have the room to make some impactful signings this offseason.

Many of the players on the active roster for 2022 are on rookie deals. Maybe the Nationals pursue a corner outfielder on a hefty, short-term deal? Could they make a long-term investment in a lights-out closer?

There’s also the component of the Washington Nationals being in the ever-disappointing NL East. The Philadelphia Phillies and New York Mets have playoff-caliber rosters that have faltered at every opportunity to make the playoffs over the last three years and are volatile, in general. Despite a stout starting rotation and a team that’s supposed to be contending for the playoffs, the Miami Marlins haven’t sustained winning baseball.

The Nationals have the pieces to be competitive to the tune of a .500 record next season. Flexibility, youth across the board and a couple fixtures remaining in place make a would-be dragged out rebuild a could-be two-year turnaround.