Washington Football Team: Ron Rivera has his squad as the best in the NFC East 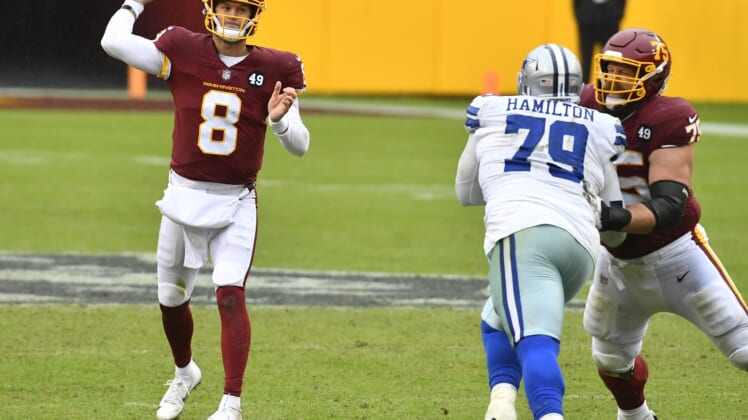 For the first time all season, the Washington Football Team won a game with ease. The team started to click for the first time this season. The Dallas Cowboys marched into FedEx Field with a backup quarterback and one of the worst defenses in the NFL.

Despite a beaten down Cowboys team, Washington has struggled to beat teams who have been putting up poor performances of late. Washington did not struggle versus the Cowboys. Actually, head coach Ron Rivera’s team did not just win but dominated.

Washington has a bye week for Week 8. This is the best possible way to go into said bye week. Washington hopes this momentum will carry into Week 9 where the team will play their NFC East rival, the New York Giants.

The win overal Dallas propels Washington to the best team in the NFC East. Here are the three reasons why.

The NFC East Standings is wide-open

The NFC East has dubbed the nickname “the NFC Least” due to poor performances and subpar records. Right now, the NFC East is living up to the nickname. The Philadelphia Eagles are in the first place with a mere 2-4-1 record.

With the win versus Dallas, Washington is now in second place right behind the eagles. Washington also beat the Eagles in Week 1. Both teams have struggled mightily this season. The Eagles have been hit hard by the injury bug, and this is the excuse many are making for the Eagles.

However, there are no excuses for Washington. It is a young and inexperienced team with a brand-new head coach. Washington benched its starting quarterback Dwayne Haskins and has been adjusting its scheme with a new quarterback Kyle Allen.

Washington should have beat the New York Giants in Week 6, but a botched two-point conversion attempt cost them the win. The Eagles barely beat the Giants the following week.

Washington is fortunate that the Cowboys and Eagles have also struggled this year. If Washington can utilize the lack of wins in its division, a playoff berth is exactly what this young team needs.

Washington’s next three games are against the Giants, Lions and Bengals. These are very winnable games for the team. Washington will be coming off a bye week versus the Giants and the team will be motivated to get revenge for a very winnable Week 6 game.

Washington will then fly to Detroit and face a tough Lions team. As this article is written, the Lions’ record is 3-3. They have won two consecutive and are coming off a tremendous comeback win over the Atlanta Falcons in Week 7.

The Lions have faced very tough teams, so the record is tainted with a few extra losses. Washington does not stack up with the Packers and Bears, but should be able to put a different type of pressure on the Lions.

Washington’s pass rush will cause headaches for Matthew Stafford all day and force him into turning the ball over. Washington’s defense is key down the stretch as the offense continues to find its groove.

Joe Burrow and the Bengals’ record does not show how good they have been. Four out of their five losses have been by one score. For his part, Burrow is on pace to break the single-season rookie passing mark.

However, the Bengals have one of the worst offensive lines in football and will be faced with containing Chase Young and co. Washington should be able to make Burrow scramble all day and beat up on a poor Bengals defense.

Washington’s offense has struggled all season but is starting to turn the corner. Kyle Allen has not been great, but he has been good enough to win football games.

Running back Antonio Gibson is finding his groove midway through his rookie season. He rushed for 128 yards on 20 carries in Washington’s win over Dallas. Terry McLaurin is finally being used as a No. 1 receiver and is becoming the focal point of the entire offense.

Washington’s offense still has a long way to go. The team has struggled thus far to consistently get anything going on offense. Allen struggled versus the Giants and needs to step up coming off the bye week to take this team to playoff contention.

Washington’s offense is thin at the receiver position outside of McLaurin. The running back position is coming along while the offensive line is making improvements. Washington has gradually been improving as the season progresses.

If Washington continues to improve every week, the team should find themselves atop the NFC East when all is said and done.