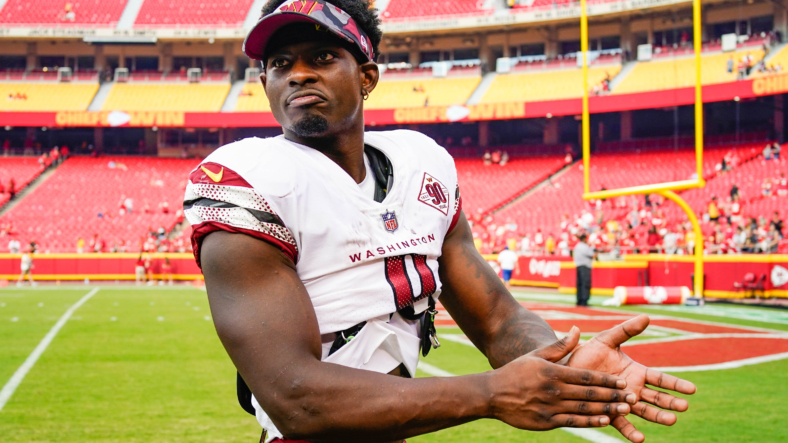 Just days after it had appeared Brian Robinson had secured the starting running back job for the Washington Commanders, the 23-year-old rookie was shot twice in an attempted robbery. After receiving treatment to his lower body, Robinson had to rely on crutches to get around for a short time. Thankfully, on Wednesday, coach Ron Rivera revealed the swelling on Robinson’s leg had gone down a lot, and the former Alabama tailback was able to ditch the crutches.

Still, Robinson was placed on the team’s non-football injury list and is automatically set to miss the Commanders’ first four games of the season.

Despite these unforeseen hurdles, Robinson’s progress has him preparing to return to the field for what would be his official NFL debut in Week 5 against the Tennessee Titans.

Brian Robinson’s arrival could come at perfect time for Washington

If Robinson truly can make his NFL debut on October 9 against the Titans, it should give him a good test against what figures to be a stout rush defense. Mike Vrabel’s squad ranked 11th in rushing yards allowed in 2021.

But it’s really the next game that could provide Robinson with one of his better opportunities of the season. In Week 6, the Commanders travel to Soldier Field to take on the Chicago Bears, a team that’s entering the season with an over/under set at 6.5 wins. Adding insult to injury, the Bears were one of the worst at stopping the run a year ago, allowing the 10th-most rushing yards per game.

If Robinson can get back in action in Week 5, it gives him a chance to learn from a few mistakes early on, as well as work on his conditioning as he prepares for what could be a strong performance in Week 6. Since Robinson’s injury was to his leg, he’ll likely need to take these next few weeks to get back into tip-top football shape. Although his debut may have been delayed, everyone associated with the Commanders are excited to see what their third-round pick can do.

Related: Top 2022-23 NFL Rookie of the Year candidates: Aidan Hutchinson and Garrett Wilson are in good spots before Week 1