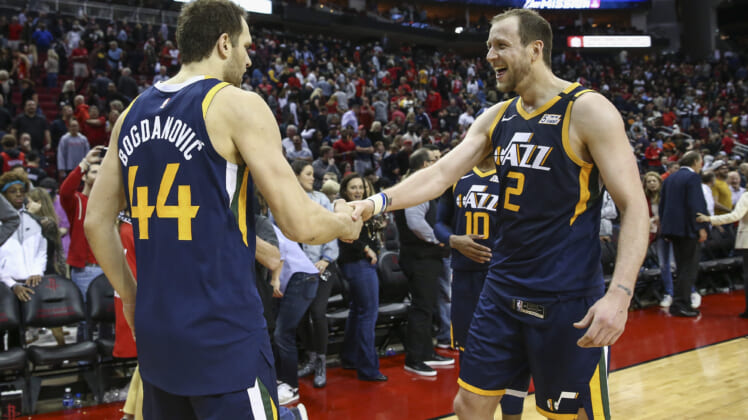 The Utah Jazz finished up shop on the regular season with a league-best 52-20 record, only to fall to the Los Angeles Clippers in the second round of the NBA Playoffs.

This has led to questions about whether a core group led by Donovan Mitchell and Rudy Gobert is in fact championship caliber.

With Gobert having just recently signed a max contract extension with the Utah Jazz and Donovan Mitchell under contract long-term, it doesn’t look like either will be moved soon. Of course, that’s also dependent on whether Mitchell remains happy in Salt Lake.

But according to this report from Matt Moore of The Action Network, two other headline players for the Jazz in that of Bojan Bogdanovic and Joe Ingles could be traded this summer.

“However, sources suggested that Bojan Bogdanovic and Joe Ingles were also bandied about as available if the Jazz could get a significant upgrade, which would be a major shakeup for the team, especially with Mike Conley headed to unrestricted free agency this summer,” Moore reported.

There’s also suggestions that the Jazz are looking to move the remainder of Derrick Favors’ contract. He’s set to count $9.72 million against the cap in 2021-22 and has a $10.18 million player option for 2022-23. The idea here would be to, somehow, find a third star to team up with Gobert and Mitchell.

Whether this trio coupled with draft pick assets could net the Jazz a star remains to be seen. However, both Bogdanovic and Ingles could be of intrigue to other teams.

Utah Jazz have the assets to make a splash

Bogdanovic, 32, averaged 17.0 points and 3.9 rebounds on 39% shooting from distance for Utah this past season. Back in 2019-20, he averaged a career-best 20.2 points on 41% from beyond the arc. We’re talking about a score-first wing with limited capabilities on defense.

As for the 32-year-old Ingles, he’s a studly three-point shooter, too. The Australian shot 45% from distance this past season. He’s in the same boat as Bogdanovic in terms of being limited on the defensive end of the court.

The issue here would be getting fair market value for the two. They are set to count a combined $31.73 million against the cap next season.

If the Utah Jazz were to retain free-agent point guard Mike Conley, it stands to reason that they’d be looking for a wing in exchange for the three veterans mentioned above. Perhaps, someone like Zach LaVine from the Chicago Bulls could make some sense.