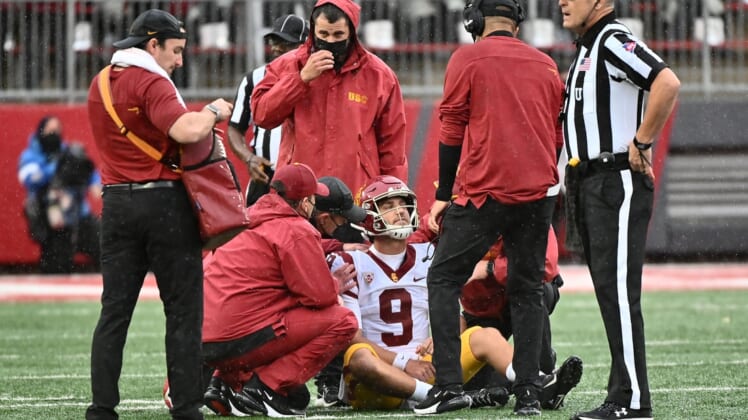 Sep 18, 2021; Pullman, Washington, USA; USC Trojans quarterback Kedon Slovis (9) is checked out by medical staff during a game against the Washington State Cougars in the first half at Gesa Field at Martin Stadium. Mandatory Credit: James Snook-USA TODAY Sports

Southern California interim coach Donte Williams said he expects Kedon Slovis to practice on Monday after X-rays and an MRI on the quarterback’s neck came back negative, the Los Angeles Times reported on Sunday night.

Williams said he and offensive coordinator Graham Harrell will decide whether Slovis or Jaxson Dart will start the next game for the Trojans (2-1, 1-1), a Pac-12 matchup vs. Oregon State (2-1, 0-0) on Saturday.

“If that’s what’s best to win games, then that’s what we’re going to do,” he told the Times.

Slovis, a junior, left Saturday’s 45-14 road win over Washington State early in the first quarter because of the neck injury. He suffered the injury on a sack by Andrew Edson and completed 1-of-2 passes for 8 yards.

Dart, a freshman, replaced Slovis and passed for 391 yards, setting a school passing-yardage record for a debut. He finished 30-of-46, with four TD passes, and was intercepted twice.

Slovis has 50 touchdown passes in 21 games (20 starts) for the Trojans. He has 5,910 passing yards and has thrown 17 interceptions.