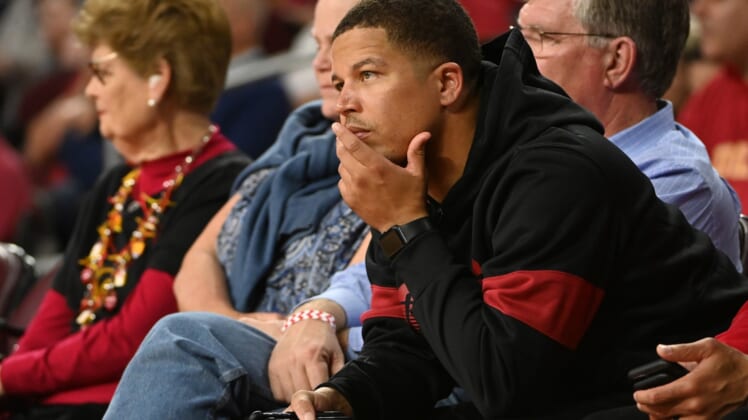 With an interim head coach and reeling from a blowout loss in Week 2, Southern California visits Pullman, Wash., for a Pac-12 showdown with Washington State on Saturday.

The Trojans (1-1, 0-1 Pac-12) opened league play with a 42-28 loss at home to Stanford, which was not as close as the final score indicates. USC tacked on two touchdowns late in the fourth quarter, well after the outcome was no longer in doubt.

The defeat marked the Trojans’ fourth by two touchdowns or more since the beginning of the 2019 season, and resulted in the dismissal of coach Clay Helton on Monday afternoon.

The task of getting last season’s Pac-12 South division winner back on track likely starts with the offense.

USC sputtered in each of its first two games, sitting on 13 points through three quarters in the 30-7 season-opening win over San Jose State and the loss to Stanford. Trojans quarterback Kedon Slovis finished Week 2 by leading a pair of touchdown drives — including a scoring pass to receiver Drake London, who Helton said on Sunday “tweaked” his back but should be full-go at Washington State — but also gave up a pick-six.

In both of their contests, the Trojans failed to generate touchdowns when getting into the red zone, combining for just four in nine trips inside the 20-yard line.

Washington State (1-1, 0-0) has not been significantly better on its red-zone opportunities, converting just 6 of 12 into touchdowns. It cost the Cougars in a 26-23 Week 1 loss to Utah State, when they settled for field goals on three trips inside the 20 and failed to score on another.

In a 44-24 victory in Week 2 against Football Championship Subdivision opponent Portland State, the Cougars reached the end zone on 5 of 7 red-zone chances.

“Communication,” wide receiver Travell Harris said Tuesday is central to Washington State improving its offensive production in Week 2. “Making sure everybody (is) on the same page, getting timing down with the quarterback, whoever is back there.”

Washington State has played two quarterbacks for significant snaps in the opening contests. After Tennessee transfer Jarrett Guarantano went just 8 of 13 for 56 yards against Utah State, however, Jayden de Laura reassumed the job he held for much of 2020.

De Laura passed for a touchdown against Utah State and another three against Portland State.