The United States women’s water polo team capped off their Olympic run by winning the gold medal in a 14-5 win over Spain. Their 14 goals are the most scored by a team in a gold medal beating their own record of 12 goals from the 2016 Olympics.

Going into halftime leading 7-4, the U.S. blew the game open in the third quarter, scoring five unanswered goals in the period. They were led by Aria Fischer, who scored each of her two goals in the quarter.

The U.S. defense played a huge role in their victory, with goalkeeper Ashleigh Johnson blocking 12 of 17 Spain shots and six position players recording blocked shots — including three from Fischer.

Team USA’s path to the gold medal began on a dominant note in a 25-4 rout of Japan, which set an Olympic record for largest margin of victory in a match before Spain beat that mark later the same day.

After suffering a minor setback in a 10-9 preliminary round loss to bronze medalists Hungary, the Americans bounced back in a major way, defeating Russia 18-5 in their final preliminary match. 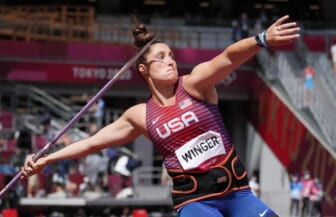 The quarterfinals saw the U.S. defeat Canada 16-5, and the team bested the Russians 15-11 in the semifinals on their way to earning gold. The win gives the U.S. women’s water polo team their third straight Olympic gold medal.

Since 2000, when women began Olympic competition in water polo, the U.S. has finished on the podium each year. In addition to winning each of the last three gold medals, they won silver in 2000 and 2008, and claimed bronze in 2004.