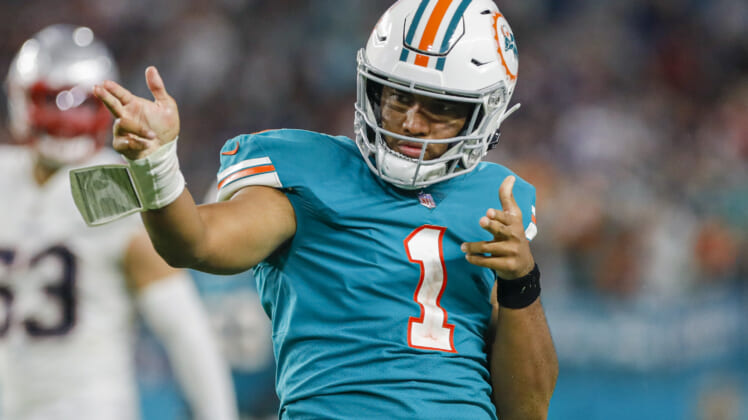 It seems that new Miami Dolphins wide receiver Tyreek Hill is doing all he can to build the confidence of his new quarterback Tua Tagovailoa and that now includes claiming he is better than his former QB Patrick Mahomes at one key skill.

The NFL world was stunned in March when Kansas City made the bold decision to trade superstar wide receiver Tyreek Hill. The move will have a massive effect on the team’s offensive capabilities in 2022, but there are some who feel Hill could have a notable dropoff in production after going from former league MVP Mahomes throwing him passes to a still-developing talent in Tagovailoa.

Ahead of working together during the Dolphins’ mandatory minicamp, Hill admitted he had low expectations of his new QB’s skillset after 21 inconsistent starts in Miami over his first two seasons. However, ever since, he has done all he can to publicly build up the confidence of the 24-year-old signal-caller.

Tyreek Hills says Tua Tagovailoa is ‘that dude’ and has a ‘heck of an arm, bro’

On Friday, during the first episode of his “It Needed to be Said” podcast Hill once again decided to shower the Alabama alum with praise about his skills as a QB.

“I’ve had a chance to see Tua throw the ball, to myself, but . . . he’s that dude, bro,” Hill said [h/t Pro Football Talk]. “Like, what a lot of people don’t know, like, I’m not just sitting just saying this because he’s my quarterback now … like, I’m not trying to get more targets right now, but what I’m trying to say is Tua is that deal, bro. He has a heck of an arm, bro. He’s accurate. He can throw the deep ball, and he actually goes through his reads.”

In trying to hammer home the point of how accurate Tagovailoa is — a common criticism from fans and NFL experts — Hill actually claimed that the Miami Dolphins’ 2020 first-round pick is more accurate of a passer than Patrick Mahomes. A player viewed as one of the best in the world at his position and a former Super Bowl MVP.

Hill’s pursuit of building up his QB’s self-belief is commendable. However, throwing passes in practice and doing so in a game is a huge difference. While Tagovailoa’s completion percentage in year two was a point better than any of Mahomes’ seasons, that doesn’t factor in the degree of difficulty. And when it comes to passing and quarterback ratings, Mahomes has a sizable advantage over his Dolphins contemporary.