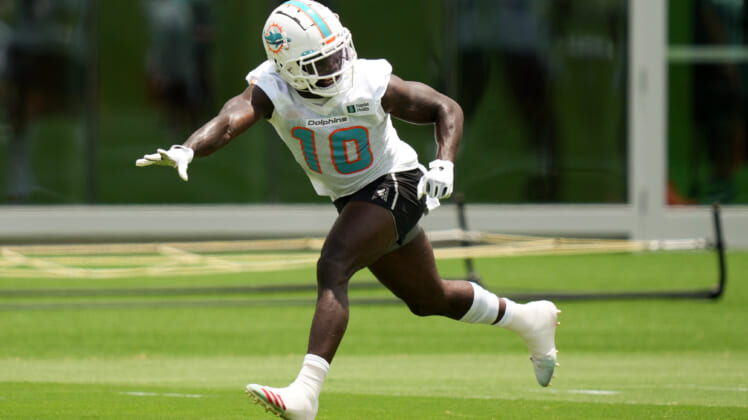 Before his first days of practice with the Miami Dolphins, Tyreek Hill did not expect to see high-level talent in the passes thrown by his new quarterback Tua Tagovailoa.

It is safe to say that Hill was probably spoiled during his last four years playing for the Kansas City Chiefs. The six-time Pro Bowler was able to run routes in an elite offense and catch passes from one of the best quarterbacks on the planet in Patrick Mahomes. After being traded to the Dolphins in March, he will work with a very different level of QB in third-year man Tagovailoa.

Certainly, the former Alabama star isn’t the worst signal-caller in the league. And over his first two years in Miami, he has amassed a very solid 13-8 record as a starter. However, he does not have a reputation as a player with a gifted arm. Especially in comparison to someone like Mahomes who can do everything required of a world-class QB.

Tyreek Hill on Tua Tagovailoa’s accuracy: ‘I thought it was going to be something crazy, the ball going all over the place’

It seems that his poor reputation as a passer led to Tyreek Hill having low expectations before he took part in his first practices with the 24-year-old QB.

“At first, I thought it was going to be something crazy, the ball going all over the place,” Hill said during a Tuesday media scrum, “but Tua actually has probably one of the prettiest balls I’ve ever caught in my life. It’s very catchable. I don’t want to continue because the more I talk, the more it sounds weird. Tua is a very accurate quarterback. That’s all I’m going to say.”

Later in the conversation, Hill elaborated on why he did not want to go into too much detail about his perceptions of Tagovailoa before he hit the field at the team’s voluntary minicamp.

And it’s all about trying to do everything he can to instill confidence in the 2020 fifth overall draft picks as he enters his third season in the league.

“I just feel like football is all about confidence and I’m very confident in my quarterback,” said Hill. “So I just feel like if I’m able to help him get all the confidence in the world and push other guys to push that confidence into him, then the sky’s the limit for the guy because he’s a heck of a talent, has crazy arm strength, arm talent.”

The Dolphins traded three picks in the 2022 NFL Draft — including one in the first round — for the three-time All-Pro wide receiver. They also gave him a new four-year, $120 million contract extension.