2022 TOUR Championship: 4 takeaways from a wild Sunday, including Rory McIlroy 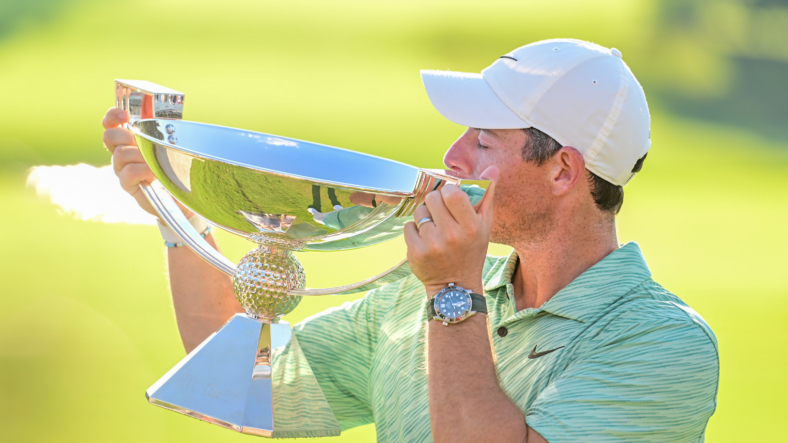 The TOUR Championship is the Super Bowl or the World Series of golf. The emotions and focus are at an all-time high for players at the top of the leaderboard, especially on the back nine as they reach the final hole.

The final grouping between World No. 1 Scottie Scheffler and No. 4 Rory McIlroy was like a heavyweight battle as two of best went head-to-head in the fourth and final round that was pushed back a couple of hours due the third round being suspended on Saturday as a result of inclement weather.

On the 72nd hole, McIlroy entered the par-5 18th hole with a one-shot lead over Scheffler. Both players, who tried to go for the green on their second shots, missed the putting surface. Scheffler went right into the bunker and McIlroy went left, off the grandstands and in the rough.

Scheffler then went too long and past the green. McIlroy got up and two-putted to win his third FedEx Cup title and $18 million.

Rory McIlroy made a par putt from seven feet out on the par-4 16th hole to take a one-shot lead over Scheffler. On that same hole, Scheffler bogeyed and surrendered his lead for the first time in the tournament.

Here are four takeaways from championship Sunday’s final round at the 2022 TOUR Championship as McIlroy becomes the only player to have three FedEx Cup titles.

McIlroy entered this tournament on Thursday at 4-under par after the first hole and was nine strokes back of Scheffler with a triple bogey. After recording a 3-under 67 in both of his first two rounds, he did even better on moving day Saturday with a 63 — highlighted by an eagle on the par-5 sixth hole.

Entering the final round, McIlroy was six shots behind Scheffler.

The big momentum shift between him and Scheffler came on the par-3 15th hole, on an island green with a tee shot over water. McIlroy made a long birdie putt from over 30 feet out and let out a big roar of emotion as Scheffler recorded a par.

McIlroy’s long make with the putter came after a bogey on the challenging par-4 14th hole where he made back-to-back bad shots for a bogey.

That’s when the Northern Ireland native made his move on the final holes to clinch his victory.

McIlroy, 33, has been through a lot this season both on and off the course and acknowledged the season Scheffler had all year with his green jacket.

McIlroy, who recorded the third largest come from behind victory on the PGA Tour this season, surpassed Tiger Woods with two FedEx Cup titles and tied Woods for most TOUR Championship wins.

Also read: Players with the most PGA Tour victories

With a six-shot lead entering the final round of the TOUR Championship, Scheffler played passive as there were multiple shots where he could have saved shots throughout his entire round.

Most of the time when a player shoots a 73 on a Sunday, they are not going to win a tournament with the number of shots a golfer wants back, from off the tee, on the green or on the approach.

That is what happened on Sunday as even the miniscule errors from forcing shots and missing reads on his putt really hurt Scheffler, who only made one birdie in his final round.

“I put myself in position to win this tournament when I wasn’t playing my best today and I’m proud of how I fought,” Scheffler said to media after his final round of the TOUR Championship.

Instead of taking home $18 million and the opportunity to win close to $38 million on the entire PGA Tour season, Scheffler takes home $6.5 million.

However, Scheffler said he was more focused on trying to get his fifth victory of the season rather than going home with $11.5 million more.

Sung-Jae Im, who started Thursday at 4-under like McIlroy, was another player who made his move up the leaderboard over the weekend for the TOUR Championship.

Like McIlroy, Im also shot 4-under on Sunday, which was the was the third-best round of the day with Max Homa and only behind Viktor Hovland, Jordan Spieth and Tony Finau’s.

Im and McIlroy ultimately had similar rounds on Sunday. Both players shot over par on the 14th hole and birdied on the following hole. In addition, both McIlroy and Im recorded a bogey and four birdies on the front nine during Sunday’s final round.

As both made their push, Im, who was in the penultimate grouping in front of Cantlay and Scheffler, came to the final hole needing to sink in an eagle chip from the rough to have any chance of getting to the top of the leaderboard.

However, he would record a par and remain one-shot back of McIlroy while tying with Scheffler at 20-under for second place. Like Scheffler, Im also took home $6.5 million.

In addition to his birdie on the 15th hole, Im also made birdie on the par-4 12th hole, which was benefitted by getting his approach shot to within six feet for birdie.

Patrick Cantlay and Xander Schauffele, who both were inside the top-3 heading into the weekend of the TOUR Championship, could both not quite continue their success on Sunday.

Both Cantlay and Schauffele couldn’t get their putters hot as they were missing much-needed putts, both left and right.

Cantlay, who was searching to become the first player to win consecutive FedEx Cup championships, shot even-par 70 and finished in a tie for seventh place with Sepp Straka.

Schauffele, who was right behind Scheffler for most of the tournament, lost his touch on Sunday, both in the morning session of the continuation of the third round and in the final round.

After concluding his second round going birdie-birdie-eagle, Schauffele could not quite regain the momentum as he recorded a 1-under 69 in his final round.

Now, most of these players playing in this week’s PGA TOUR Championship will have a couple weeks off before preparing for the President’s Cup in a few weeks at Quail Hollow Club in Charlotte, N.C.