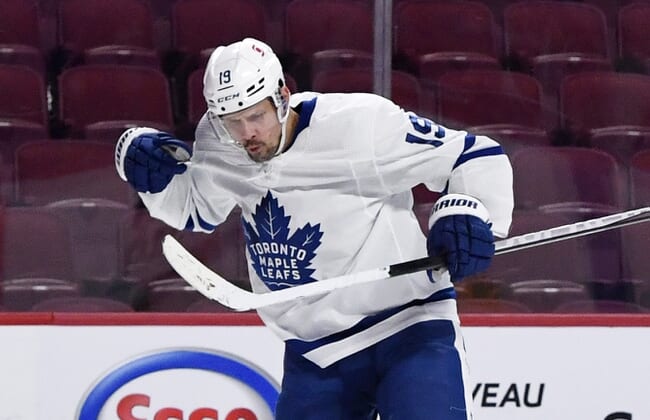 May 29, 2021; Montreal, Quebec, CAN; Toronto Maple Leafs forward Jason Spezza (19) reacts after scoring a goal against the Montreal Canadiens during the third period in game six of the first round of the 2021 Stanley Cup Playoffs at the Bell Centre. Mandatory Credit: Eric Bolte-USA TODAY Sports

The Toronto Maple Leafs signed center Jason Spezza to a one-year extension for the league minimum $750,000 on Wednesday.

Spezza, who turned 38 on Sunday, will return for his 19th NHL season and his third with his hometown Maple Leafs.

In 54 games in 2020-21 Spezza tallied 30 points on 10 goals and 20 assists, his highest totals in each category since the 2016-17 campaign. He added three goals and two assists in the seven-game playoff series the Leafs lost to the Montreal Canadiens.

The second overall draft pick by the Ottawa Senators in 2001, Spezza played 11 years for Ottawa and five for the Dallas Stars. For his career, Spezza has recorded 351 goals and 619 assists (970 points) in 1,177 career games, with 54 game-winning goals.

It will mark the third straight season Spezza will earn the league minimum to suit up for Toronto.

Spezza has yet to win the Stanley Cup. He said after the Leafs’ elimination this postseason that he still sees unfinished business in the NHL.

“I love the game,” Spezza said. “I think I realized that my opportunities to win are becoming less and less and that probably creates a high level of desperation internally for me to drive and to be my best every day. I’m not sure how much longer this goes … I really want to win, so I think that drives me.”