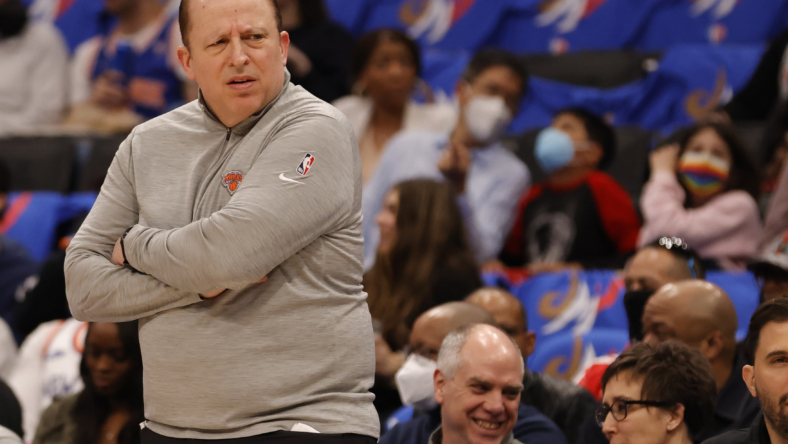 Tom Thibodeau is an excellent coach. For yesterday’s NBA. Today’s NBA is no place for coaches like Thibs. He has company. Doc Rivers is the same. Both were together in Boston when Rivers won the championship. That’s as close as Thibs will be to the NBA Finals again. Why? Here are three reasons.

Please don’t misunderstand me. Thibs is an excellent coach. He won Coach of the Year in 2021, helping the Knicks reach the fourth seed in the East.

The situations were far different then. Julius Randle was the Most Improved Player and went to the All-Star game. But when the Knicks opened the doors to the Garden, that Randle disappeared, and Thibs could not get him back. The team finished with a defensive rating of 108.2 that season, the third highest in the league. Unfortunately, that version vanished and hasn’t been seen again.

Today, the Knicks’ defensive rating is 112.9, ranking 29th in the league. This is from the so-called number one defensive coach in basketball.

So far this season, none of the Knicks’ players are performing as they should or even as well as last season. This brings me to number two.

Thibs is not a developmental coach

What the front office has failed to notice is that Thibs is not a developmental coach. During the 2020-21 season, the Knicks had two coaches who they don’t seem to have ever replaced.

Mike Woodson and Kenny Payne. Woodson was the coach who took the Knicks to the playoffs in their 54-win season. After he was let go, the Knicks didn’t return to the playoffs until 2020-21, when he returned. The Knicks ended the season 41-31 in one of the most exciting efforts the organization has had in some time. Until the next season.

It was as if the previous season didn’t happen. Now you have to ask yourself, how much of the prior effort had anything to do with Thibs?

The 2021-22 season was the opposite. Was the departure of Kenny Payne the reason for the total turnaround season Randle had? Randle was no longer an All-Star, yet during this time, his coach did not sit him down when he was ornery on the court or was throwing up brick after brick. But his teammates were taken out if they missed a shot or made a turnover. Meanwhile, his star player was nicknamed “no handle, Randle”.

The result — a bad-tempered player who brought his whole team down. He even gave his fans the thumbs down. That season resulted in cries for Randle to be traded this past offseason. In the meantime, Obi Toppin, Quentin Grimes, Miles “Deuce” McBride, Jericho Sims, and Cam Reddish sat on the bench, not developing for a team that truly needs to start a rebuild.

Bottom line, what type of coach places a player over the betterment of the team? This brings us to number three.

Coach of the year no more

Before the beginning of the season, Alan Hahn sat down with Knicks president of operations, Leon Rose, who was asked about the status of Tom Thibodeau. Rose said that Thibs was not under any pressure going into his third season as Knicks’ coach.

“We’re not making any excuses for anything that happened last year. I love Thibs’ phrase: We’re going to win or we’re going to learn.”

The Knicks are learning to lose, Mr. Rose.

After these first 17 games, we can’t help but wonder what Rose is thinking of his coach. If Thibs is not on the hot seat, Rose certainly will be.

So far this season, the Knicks have been blown out, blown up, and still, according to their coach, “it’s good.” Is the front office going to wait until the Knicks are past the point of no return?

This is a very good young Knicks team, Julius Randle included. Knicks fans are grasping at any young “star” that is rumored to be disgruntled. My question is, why? With the Knicks’ setup, it wouldn’t make any difference. They have potential stars on the team now.

Before going on the road, the Knicks’ players, led by Randle, had a team meeting that seemed to yield some positive results. On the present west coast road trip, the Knicks defeated the Utah Jazz and Denver Nuggets, giving each team their first home losses. But a blowout by Golden State and a loss to the Phoenix Suns by 21 points after tying the game in the third quarter says more about the coach than the players.

The looks on his players’ faces after Sunday’s loss will hopefully push them to do better on Monday. And after the wins in Utah and Denver, there are no excuses for the weekend’s losses.