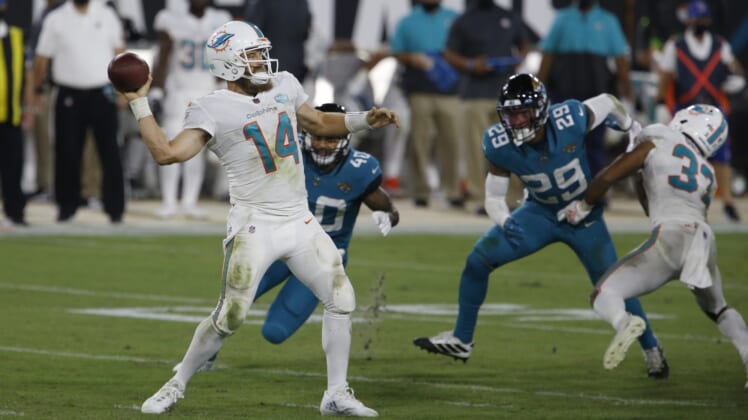 The Miami Dolphins and Jacksonville Jaguars took the field on Thursday Night Football with fans expecting to witness a dull game. Instead, we saw quite a few fireworks as Ryan Fitzpatrick led Miami to a surprising victory to kick off Week 3 of the NFL season.

Jacksonville came in as a three-point favorite, but quickly found itself humbled by the Dolphins’ offense. Fitzpatrick got hot early, starting the game a perfect 10-for-10 through the air and even stomped all over the defense with his mobility. By the time we reached halftime, the Jaguars were licking their wounds amid a 21-7 deficit.

Things didn’t get much better for Jacksonville in the second half. While undrafted running back James Robinson added to his incredible story, his teammates couldn’t match the rookie’s efforts. The Jaguars made it interesting near the end, but it was too little too late on Thursday Night Football.

Let’s examine the winners and losers from the Dolphins’ 31-13 victory over the Jaguars on Thursday Night Football.

Fitzpatrick’s 2020 season started on a disastrous note with the 37-year-old quarterback playing like he should have retired years ago. He rebounded in a strong Week 2 performance, then took things to an absurd level with an MVP-like thrashing of the Jaguars’ secondary in Week 3.

Frankly, this game was over before the third quarter began. Fitzpatrick found every hole in Jacksonville’s defense, completing 12-of-14 for 127 yards with two touchdowns. He also impressed on the ground, showing some fight for a player approaching his 40s, rushing for 38 yards and a score. Fans wanted Tua time after the season-opening loss, but something tells us there will be more FitzMagic after combining for nearly 500 yards and five total touchdowns the past two weeks.

We loved Henderson in his NFL debut, with the rookie looking like a future star capable of making game-saving plays. That’s the thing about rookie defensive backs, even top-10 picks, bad days come with the good. In his primetime debut, Henderson had some embarrassing moments on Thursday Night Football.

It began with a mental lapse, forgetting what level he was playing at. Henderson’s brain flipped back to his college days, letting Jakeem Grant get up untouched after a touch on the ground. It didn’t get any better after that. Henderson committed blatant pass interference in the end zone, setting up a one-yard touchdown. He was also taken to school by wide receiver DeVante Parker, who played on an injured hamstring. On top of that, he was late to react on a throw and gave up a touchdown. This is a night that Henderson will want to forget, but he must learn from it.

It’s safe to say 31 NFL teams wish they didn’t overlook this rookie. Even on a night when Jacksonville’s offensive line made it practically impossible to run the football, Robinson made an impact. He racked up 46 rushing yards and two touchdowns, while adding six receptions for 83 receiving yards. It’s evident why the Jaguars moved on from Leonard Fournette. Jacksonville has its starting running back of the future and it didn’t even cost them a draft pick.

Conley, a third-round pick in 2015, boasts plenty of raw talent. Unfortunately, it’s just not coming together for the 6-foot-3 receiver. Once an NFL Combine darling with a 4.35 40-yard dash, Conley is showing everyone why athleticism doesn’t matter at the position if your hands are made of stone.

The fact that Conley dropped his first target of the game, which would have put Jacksonville’s offense in scoring range, should have been a sign of things to come. Without Pro Bowl receiver D.J. Chark, Gardner Minshew had no choice but to keep looking Conley’s way. A deep throw down the field paired nicely with a great adjustment by Conley, but it bounced right off his stomach. He was also called for an obvious OPI that wiped out a first down on top of the drops. Conley is a great athlete, but isn’t a starting-caliber receiver.

Miami entered the offseason with a lot of money to spend and even more holes to fill on defense. While we didn’t get to see prized signing Byron Jones on Thursday Night Football, the Dolphins other investments on defense made a huge impact in Week 3.

At linebacker, Kyle Van Noy and Shaq Lawson made the plays Miami envisioned when they signed the duo. Van Noy, the former do-it-all linebacker for the New England Patriots, picked up a sack, two quarterback hits and one powerful hit. Lawson replicated his teammate’s stat line, racking up a sack and two hits on Minshew. Frankly, this entire front seven came to play with a jaw-dropping 10 quarterback hits. It’s a great sign for this defense, but things will be more challenging in Week 4 against Russell Wilson.