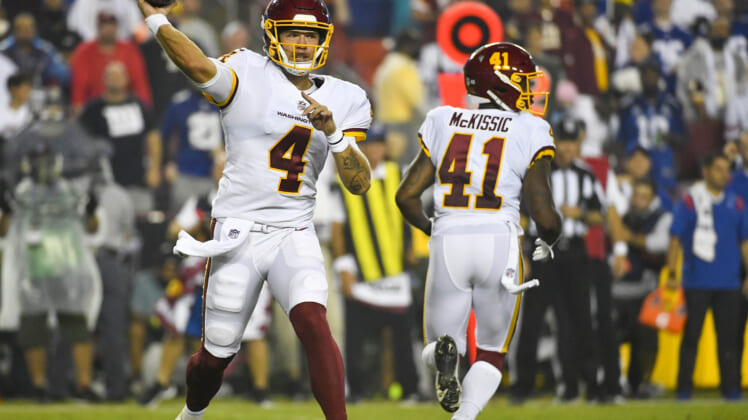 Washington Football Team quarterback Taylor Heinicke has been thrown under center with short warning for the second time in the matter of months.

The 28-year-old former undrafted free agent from Old Dominion is being called on to replace Ryan Fitzpatrick at quarterback for Washington after his more veteran counterpart suffered a hip injury in Sunday’s season opener.

With his Washington team down by six against the New York Giants in the fourth quarter Thursday night, Taylor Heinicke took it upon himself to lead them down the field 75 yards on two plays — both passes.

The first play was a 56-yard pass to running back J.D. McKissic.

Immediately after that, Heinicke hit Ricky Seals-Jones on a 19-yard touchdown pass to give Washington a 27-26 lead.

Talk about two big-time throws from the veteran journeyman.

Washington is attempting to rebound after last week’s home loss to the Los Angeles Chargers. Meanwhile, New York is in desperation mode after falling to the Denver Broncos in Week 1.

As for Taylor Heinicke, he gaining a lot of fans in the nation’s capital.