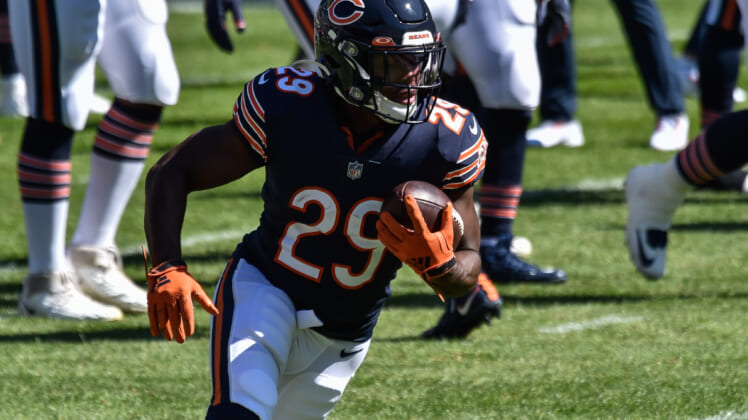 You’d be hard-pressed to find an active NFL player who’s been more unlucky than former Chicago Bears running back Tarik Cohen over the past few seasons.

Shortly after signing a four-year, $17.25 million contract extension with the Bears in Sept. of 2020, Cohen has played in just three NFL games since. Now, a new injury might cause him to begin a whole new road to recovery before he can get back on the gridiron.

It all started in Week 3 of the 2020 season, when Cohen tore his ACL, causing him to miss his first game since entering the NFL in the fourth round of the 2017 NFL Draft. After playing in 51 consecutive games, Cohen would go on to miss the next 30 games the Bears would play.

Cohen also later revealed that he also tore his MCL and fractured his tibial plateau in addition to the ACL injury.

In theory, an ACL tear takes players off the field for about a full season, usually placing them on track to be ready for the start of a new year, depending on when the injury occurred. For Cohen, he should have had plenty of time to recover for the start of the 2021 training camp with the Bears.

Instead, Cohen was experiencing knee stiffness nine months after surgery. The Bears placed Cohen on the Physically Unable to Perform list, which knocked him out for the first six games of the 2021 season.

Cohen was never activated at any point last year, with David Montgomery taking full control over the starting tailback position for the Bears in his absence.

Once the 2022 offseason rolled around, the Bears released Cohen with an injury designation, indicating he still isn’t healthy enough to play football after failing their team physical.

Still just 26 years old, Cohen should have had plenty of interested suitors as an unrestricted free agent, but it’s possible teams wanted to see him 100% healthy first.

Typically, for those who remain, the free agent market picks up after the conclusion of the NFL Draft. Although for Cohen, it’s going to be the same story as before after suffering another late setback.

Unfortunately, those hoping to see Cohen on an NFL field this preseason may have to wait even longer now that the 5-foot-6 Human Joystick has suffered another injury.

During his offseason football training, Cohen was recently seen on Instagram Live going through a workout but those tuning in witnessed a horrific injury, with a noticeable “pop” sound coming from Cohen’s activity.

The exact seriousness of the injury is unknown. As Cohen can be seen addressing the area on video shortly after the injury occurs, it appears to be to his lower right leg, and the pop obviously isn’t an ideal sound for a quick recovery.

This is an extremely tough break for a player who’s worked tirelessly at getting back on the field. Cohen is certainly well-liked, and his recent written letter for The Players Tribune only created more of a following for the electrifying athlete.

With details scant as of now, we will pass along more info once it’s known. Let’s hope for a better-than-expected medical diagnosis for a player who’s already had his fair share of bad injury luck in the NFL.

Related: Predicting the fantasy football sleepers and breakouts for 2022