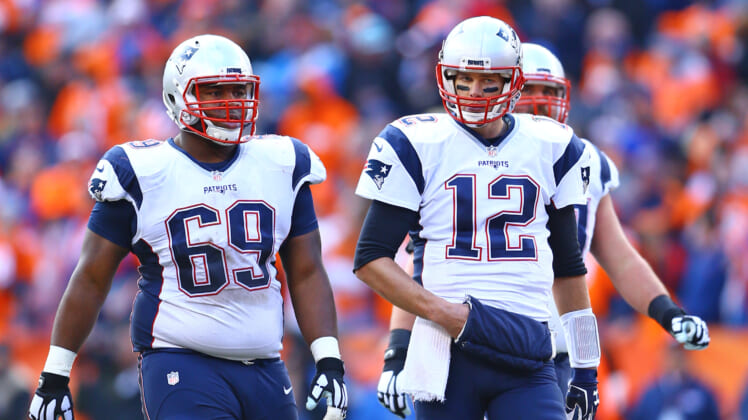 The Tampa Bay Buccaneers just added yet another familiar face for Tom Brady to return to. Needing a replacement since Ali Marpet announced his retirement, and with Alex Cappa heading to Cincinnati, the Bucs added offensive guard Shaq Mason from the New England Patriots.

According to Field Yates, it’s a done deal, and for the price the Bucs got him for, it’s a steal.

Analyzing the Shaq Mason trade for the Buccaneers

As mentioned, this is a steal. Mason has proven to be one of the better offensive linemen in football since Bill Belichick selected him 141st overall in the fourth round of the 2015 NFL Draft. Mason allowed just one sack and committed four penalties across 955 snaps per Pro Football Focus a season ago. With that, he graded out with an elite 85.2 PFF grade.

Call this the “Tom Brady effect”. Crazy how once a Hall of Fame quarterback announces his return that players seem to begin filing in at ridiculous rates. It’s nothing we haven’t seen before. In this case, the Bucs benefit by having Brady. Without him, who knows if such a trade would have been available.

Would Mason still want to head to the Bucs? Maybe not. It likely depended on their QB situation. Not only that, would general manager Jason Licht still have been all in on competing for another Super Bowl? Internally, probably yes, but a move such as this helps prove it.

And of course, Mason gets to reunite with Brady, for whom he blocked for from 2015-2019 with the Patriots, before Brady took his talent to Tampa. Needless to say, both Mason and Brady are likely thrilled by this latest development. Who wouldn’t want to have a chance at adding another Super Bowl ring to their collection?

How did the New England Patriots fare by trading Shaq Mason?

We routinely see the Patriots shed veterans for pennies, sometimes releasing them all together. In this case, they get a fifth-round selection for a player who apparently wasn’t in their plans anyway.

Trading Mason shaves $7 million off the Patriots’ 2022 cap sheet, which frees up money to perhaps chase a playmaking wide receiver.

The Patriots never seem to be too impacted by decisions that shock the rest of the football world. Belichick just has a much better feel for his roster than us armchair GMs, no surprise there.