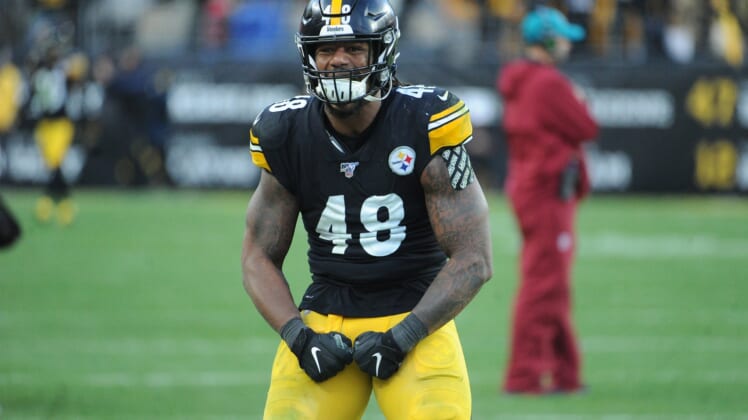 The undefeated Pittsburgh Steelers earned a hard-fought 19-14 win over the Baltimore Ravens on Wednesday to move to 11-0 on the season. Unfortunately, there’s some really bad Steelers news coming out of the game.

According to multiple media reports, the Steelers believe star pass rusher Bud Dupree suffered a torn ACL late in the fourth quarter and will be lost for the remainder of the season.

Dupree, 27, was a first-round pick of the Steelers back in 2015. After struggling with consistency through his first-four NFL seasons, the Kentucky product picked it up big time in 2019. He recorded 17 quarterback hits, 11.5 sacks and four forced fumbles.

Thus far this season, Dupree had tallied 15 quarterback hits and eight sacks in 10 games heading into Wednesday’s outing against the Ravens. The impending free agent is earning $15.83 million under the franchise tag this season.

Steelers news: How can the team replace Bud Dupree?

For the undefeated Steelers, this is an absolutely crushing blow. Remember, it was earlier this season that Pittsburgh lost defensive play-caller Devin Bush to the very same knee injury Dupree suffered on Wednesday. Two major cogs lost for the remainder of the season.

Through the first 11 games of the 2020 season, Pittsburgh has recorded a whopping 41 sacks with T.J. Watt (11) leading the way and Dupree right behind him.

As one of our top impending free agents, it’s nearly impossible to replace Dupree. Pittsburgh will give rookie Alex Highsmith more of a shot at outside linebacker opposite Watt.

As for Dupree, this is unfortunate timing. He was slated to cash in once March comes calling. Typically, injuries of this ilk can cost a player nearly a calendar year. Even if the star edge rusher were quick in his rehab, there’s little reason to believe he’ll be ready for Week 1 of the 2021 NFL season.