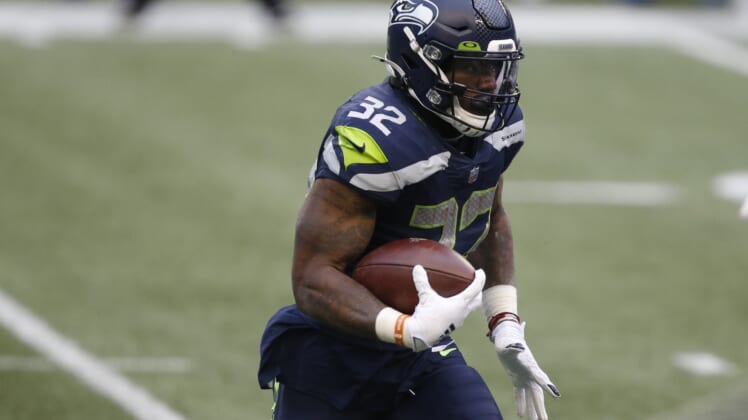 The Seattle Seahawks decided to bring back running back Chris Carson on a three-year, $24.625 million deal on Friday, per ESPN’s Adam Schefter.

One could interpret this move as a positive for the Seahawks’ future and an indication that they’re providing further support for disgruntled quarterback Russell Wilson. On the other hand, maybe a strong, reaffirmed commitment to Carson means Seattle is planning for life without Wilson.

Here are the next two moves the Seahawks should make as they look to build their team for contention in 2021 and beyond.

Unlike the Deshaun Watson situation with the Houston Texans, it seems at least somewhat feasible that the Seahawks can salvage their relationship with Wilson.

Extending Carson may be interpreted as an indication that head coach Pete Carroll is getting his way. That is, Seattle is going to be dedicated to the running game, and not “let Russ cook” as often as he’d like.

On the other hand, leaning more on the run, and then setting up bigger shot plays downfield to the likes of Tyler Lockett and DK Metcalf may be what Wilson needs to extend his career.

Other good-faith moves have been made by the Seahawks this offseason. They re-signed Ethan Pocic and traded for Gabe Jackson to shore up the offensive line. They even turned down a blockbuster trade offer from the Chicago Bears that would’ve sent Wilson to the Windy City.

This is a little bit of the classic Jerry Maguire “help me, help you” quid pro quo here. Seattle is hardly in a position to ask Wilson to restructure at this very moment. The thing is, though, if the Seahawks are going to overcome their recent disappointments and make it past the NFC Divisional Round for the first time since the 2014 season, it’s going to take some flexibility from the face of the franchise.

According to Over the Cap, a basic restructure for Wilson would net Seattle $12.66 million more cap space in 2021. More to spend on groceries now — and tons of space still left over for the 2022 offseason when Lockett and other stars hit the open market.

With what cap space? Well, for one, stud linebacker Bobby Wagner could save Seattle a pretty penny if he agrees to restructure his contract, and even more could be saved if Wilson follows suit.

Carlos Dunlap came in as an in-season trade arrival from Cincinnati and had a serious impact in 2020 with five sacks in eight games. However, he might’ve priced himself out from what the Seahawks can pay him, which leaves the door open for a bargain in Clowney.

While he’s not the reputable pass-rushing force Dunlap is, Clowney is a solid edge-rusher whose calling card is more so defending the run. It also helps that he’s played in Seattle before and is familiar with Carroll’s program.

Clowney is the exact type of proven leader the defensive end position needs in Seattle. With such a uniquely skilled safety in Jamal Adams to complement him, imagine what Clowney could do. Adams is a game-changer for many reasons, not least of which is his knack for pressuring the opposing QB.

You just don’t see safeties rack up 9.5 sacks in 12 games like Adams did this past season. Combining his freakish skill set with Clowney’s on a one-year prove-it deal before the NFL salary cap goes way up in 2022 sounds like a great situation for all involved.

Carroll is very much of the “run the ball, stop the run” school of thought. The problem is, until Dunlap arrived in 2020, the Seahawks couldn’t really put that into practice because their defense was struggling mightily, as Adams was also fighting through multiple injuries and missed time.

Selling Wilson on staying in Seattle isn’t something that will happen overnight, but if general manager John Schneider continues shopping and acquires players like Clowney, chances are the signal-caller will see the light.

Whether he realizes it or not, Wilson is actually being catered to quite well even as trade speculations swirls.