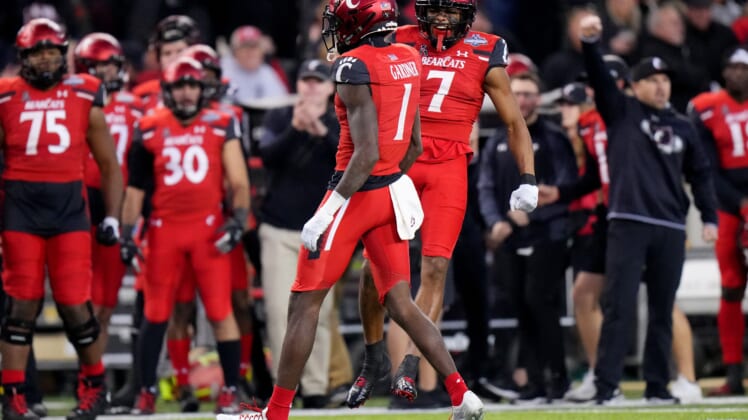 As NFL draft analysts and evaluators debate over who the top cornerback in the incoming pool of prospects is, one of the athletes considered doesn’t believe there should be any debate at all. Cincinnati Bearcats cornerback Ahmad ‘Sauce’ Gardner is that man.

Since he’s regarded as a top prospect, the NFL extended an invitation for Gardner to attend the three-day event held in Las Vegas this year. As expected, he showed up with plenty of swagger, donning a necklace bearing his nickname ‘Sauce’ glistening in diamonds.

Speaking to the media just over 24 hours away from the start of the 2022 NFL Draft, where Gardner is likely to hear his name called within the first 10 selections, the one who they call ‘Sauce’ had a few notable claims to make.

Sauce made it known that he’s the best cornerback in this draft class, saying his chances to be a bust are essentially at zero percent.

If that truly is the case, if Gardner is a can’t-miss prospect with the potential to be a shutdown corner, Gardner arguably deserves more consideration to go No. 1 overall to the Jacksonville Jaguars.

That’s not exactly how this works. You expect every top-rated prospect to have confidence in their abilities, especially at this stage ahead of reaching the NFL, when players are only expected to continue to develop and improve.

Gardner is merely echoing what several others believe, he just has the cojones to say it out loud, where he knows millions will pick up what he’s putting down.

Aside from being who he feels is the top player at his position, Gardner doubles down, suggesting he won’t get complacent at any point and will strive to continue improving at his craft, even if that means playing elite football into his 30s.

Like with every prospect, there’s no telling just how high the ceiling for Gardner goes, but reality would tell you, there’s also a pretty low floor to be wary of as well. Either way, most NFL fans can’t wait for the first time Sauce Gardner steps foot on the gridiron for a professional football team.

Related: Houston Texans may be targeting Ahmad Gardner with No. 3 pick