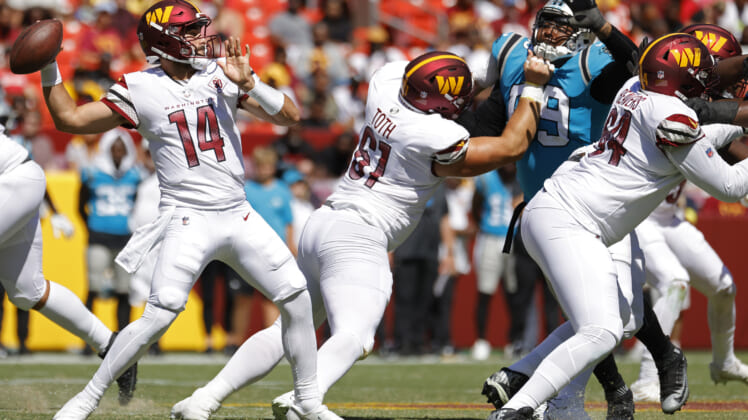 After landing with the Washington Commanders as the team’s fifth-round selection in April’s NFL Draft, outside expectations for former North Carolina quarterback Sam Howell were relatively low. No one anticipates Howell to cause Carson Wentz’s seat to heat up any time soon.

Having spent the past few months diving into his new playbook, Howell finally got a chance to make his NFL preseason debut on Saturday. Howell had an up-and-down day, but for the most part, Commanders fans were happy with the 21-year-old QB’s ability to keep the play alive.

Howell’s final stat line on the day showed he had produced a healthy amount of passing yards, but at an inefficient clip. He also took two sacks.

While Howell scored two touchdowns and a two-point conversion to help take the lead after coming into the game facing an 11-point deficit, it wasn’t enough to come away with a win.

In fact, one advanced analytics website, Pro Football Focus, suggests Howell didn’t have a very efficient day at all in his unofficial NFL debut.

Here’s a chart shared by Kevin Cole of PFF, showing the preseason pass grading and efficiency for young quarterbacks.

While we know a 56.2% completion rate won’t cut in in the NFL, Howell did still lead his team down the field on multiple occasions, so what gives?

As you can see, Howell comes in ranked among the worst first and second-year pros to have played so far this preseason. Not only does Howell’s adjusted yards per attempt rank as average, his preseason passing grade ranks as one of the worst on the chart.

This isn’t to say Howell was one of the worst quarterbacks in the preseason in Week 1, as this just shows QBs drafted from the past two years, and many others didn’t play enough snaps to qualify. But, PFF still didn’t like Howell’s rookie performance against Carolina.

Unfortunately, we don’t get a breakdown or any reasoning as to how they came up with Howell’s grade. That should all be on tape. Which, here are all of Howell’s completed passes, yet there were seven incompletions that are not shown.

However, Cole did provide some additional insight as to how Howell graded out so poorly in their system. He noted Howell had two turnover-worthy throws in just 16 attempts, despite maybe being lucky by neither of them ending up as interceptions.

For what it’s worth, PFF did have Howell charted with a 71.6 rushing grade, but his passing grade came in at just 39 in his first game. Basically, while his mobility is a clear asset, Howell still has a long way to go with his development, and that’s OK since he’s currently the third-team QB.