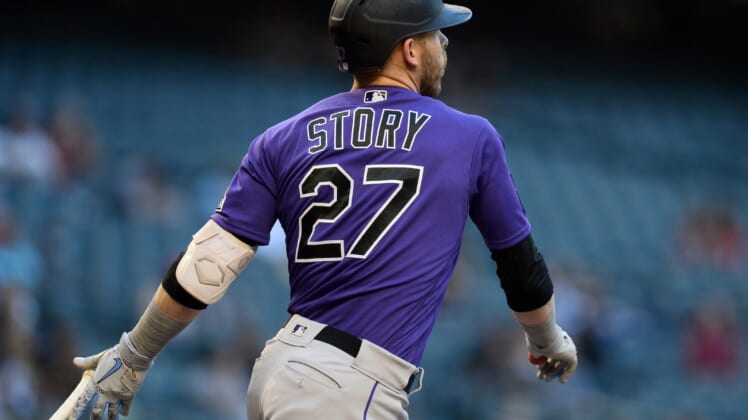 Trevor Story watched the Colorado Rockies trade franchise icon Nolan Arenado this offseason, immediately signaling a rebuild was imminent. With the MLB trade deadline approaching and rumors swirling, Story is counting down the days until he leaves Colorado.

Story, a two-time Silver Slugger Award recipient, is one of the best shortstops in baseball. The 28-year-old is in the last year of his contract and will be among the most coveted free agents in December. Given the deals Fernando Tatís Jr. and Francisco Lindor signed, Story will have his choice of lucrative offers.

According to The Denver Post’s Patrick Saunders, Story does not intend to re-sign with the Rockies this winter.

The organization, under interim general manager Bill Schmidt, wants to keep its best player for now. But once the All-Star Game passes, with Story the host at Coors Field, aggressive front offices across the league could change the Rockies’ mind.

No team is more desperate than the New York Yankees. Many anticipated this club competing for the World Series in 2021, reaching the American League Championship Series at the very least. More than one-third of the way through the season, the Yankees wouldn’t even qualify for the playoffs. New York’s lineup is one of the worst in baseball and it needs an All-Star talent injected near the top of the batting order quickly.

Colorado isn’t going to receive a monumental return, the days of teams overpaying for half-season rentals are over. Tommy La Stella (130 OPS+ in 2020) went for a player the Oakland Athletics were ready to DFA (Franklin Barreto) in 2020. Nicholas Castellanos went to the Chicago Cubs without one of the Cubs’ top-15 prospects heading to the Detroit Tigers in 2019.

Story is a superior player to Castellanos and La Stella, but the point remains. The Rockies can either keep Story through the deadline, only netting a compensatory second-round pick in 2022, or they can take the chance on multiple prospects from a quality system. The decision shouldn’t be that hard. As for the Yankees, Story takes over at shortstop and Gleyber Torres moves to second base.

The Oakland Athletics typically don’t go big-game hunting on the trade market, ownership doesn’t want to bring on the added financial obligations. But this team is open to a huge move if the right player becomes available at a position of need. So, it’s not a huge surprise that MLB trade rumors are indicating Oakland’s front office is monitoring Story.

Acquiring Story would come at a significant financial cost for the Athletics. If he’s acquired before the trade deadline July 30), Oakland would need to cover approximately $9.25 million of his remaining salary. If the front office is willing to send a stronger return, Colorado can include cash. If the A’s are serious about contending, trading for Story is the right move.

On paper, Story fits the Athletics perfectly. Oakland’s shortstops entered June 7 with the fourth-worst isolated power (.097), the second-worst OPS (.552) and the fewest Defensive Runs Saved (-28). Let’s compare that to Story, who has a career .868 OPS and .251 ISO. This kind of positional upgrade makes the difference between winning or losing the AL West.

The Tampa Bay Rays don’t need to make a Trevor Story trade. Wander Franco, the top prospect in MLB, is proving at Triple-A Durham he belongs in the majors. Promoting Franco would fix the hole in the lineup created by Tampa Bay’s current shortstops, but this team could also fill a few needs in one day.

Tampa Bay can complement this blockbuster deal this summer with a Franco promotion. Story remains at shortstop, his natural position, taking over at a spot that has combined for a .654 OPS and .286 OBP. As for Franco, he transitions to second base. Brandon Lowe (.192 BA, .673 OPS) can become part of the Rays’ outfield committee.

Given Tampa Bay’s immense pitching depth and its ability to draft-and-develop talent, they can afford this trade. Best of all for ownership, this avoids any long-term financial commitments.