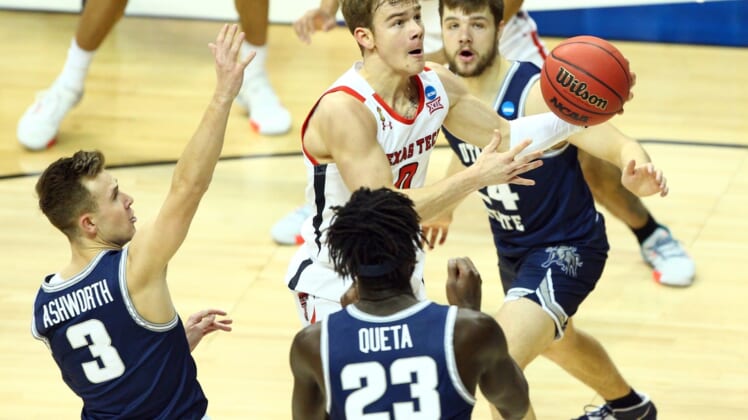 Texas Tech forced 22 turnovers and smothered Utah State in the second half to advance to the second round of the NCAA Tournament with a 65-53 win on Friday in Bloomington, Ind.

The Red Raiders will face third-seeded Arkansas in a second-round game in the South Region on Sunday.

After trailing by three, 26-23, at halftime, the Red Raiders solved their problems with a spark from their normal junkyard dog mentality while the Aggies never completely fixed their issues.

Ignited by Terrance Shannon and with a huge energy lift off the bench from Clarence Nadolny, the Red Raiders turned the game on a 13-0 run in the second half.

Mac McClung overcame a slow start to lead the Red Raiders (18-10) with 16 points, while Kyler Edwards added 12 to go with six rebounds and four assists. Shannon also notched 10 points, all in the second half after missing all four field goals he launched in the first half.

Justin Bean paced the Aggies (20-9) with 13 points but only three in the second half. Marco Anthony and Neemias Queta added 11 each and Queta was a force in the paint with 13 rebounds and seven blocked shots.

Shannon scored eight points to spark the 13-0 game-turning run early in the second half and was a key with three deflections and a steal. That surge erased a 31-25 deficit and paved the way for a dominant second half.

The reason the Aggies couldn’t seize advantage of Texas Tech’s shooties woes was a plague of turnovers – 13 in the first half and a season-worst 22 in the game – that led to 28 Red Raider points. Utah State also scuffled from outside the 3-point arc, missing 15 of 19 tries (21.1%).

Much of the credit for the Aggies’ problems goes to a Red Raider defense that was impressive in the final 20 minutes. During the tide-turning run, Utah State missed four shots and turned the ball over twice.