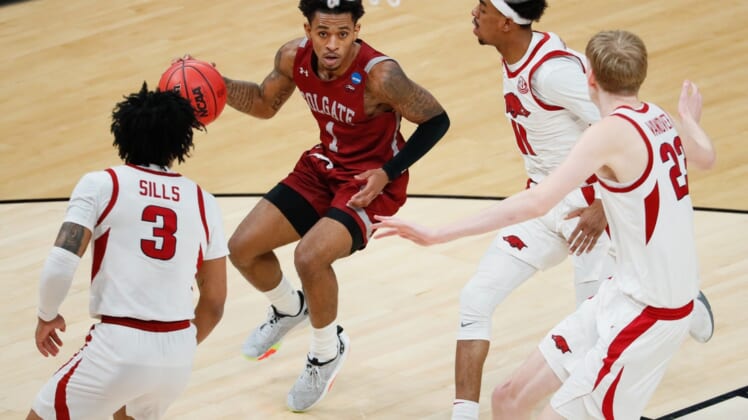 Justin Smith had a career-high 29 points to go with 13 rebounds as third-seeded Arkansas overcame a 14-point first-half deficit to hold off 14th-seeded Colgate 85-68 in the first round in the NCAA South Region on Friday in Indianapolis.

Jalen Tate added 15 points, JD Notae scored 14, and Moses Moody and Davonte Davis had 12 each as the Razorbacks (23-6) advanced to face the winner of No. 6 Texas Tech and No. 11 Utah State on Sunday.

Nelly Cummings scored 14, Jordan Burns added 13, and Jack Ferguson and Jeff Woodward had 11 each to lead the Raiders (14-3), who saw their 13-game winning streak end.

Arkansas took control by holding Colgate, which averaged 86.3 points per game, without a field goal for more than six minutes down the stretch. A 10-0 run put the Razorbacks in command with a 73-60 lead with less than four minutes remaining.

That was the second significant drought for Colgate, which didn’t score during the final 5:40 of the first half.

Tucker Richardson’s 3-pointer ended that drought nearly two minutes into the second half. Burns followed with a 3-pointer for his first basket after missing his first seven shots, and Cummings added another 3-pointer to give Colgate a 42-38 lead.

The Razorbacks tied the score before Burns made another 3-pointer. Woodward’s three-point play gave the Raiders a 50-44 lead.

The score was tied twice before Notae made a 3-pointer and two free throws. Davis’ jumper pushed the lead to 67-60 with six minutes left.

In the first half, the score was tied at 17 before Ferguson made two 3-pointers and scored eight points as Colgate went on a 10-0 run.

Smith’s jumper ended the run, but Oliver Lynch-Daniels and Ferguson made back-to-back 3-pointers to give the Raiders a 33-19 lead.

Davis made three layups and had two assists during a 17-0 run that gave Arkansas a 36-33 halftime lead.