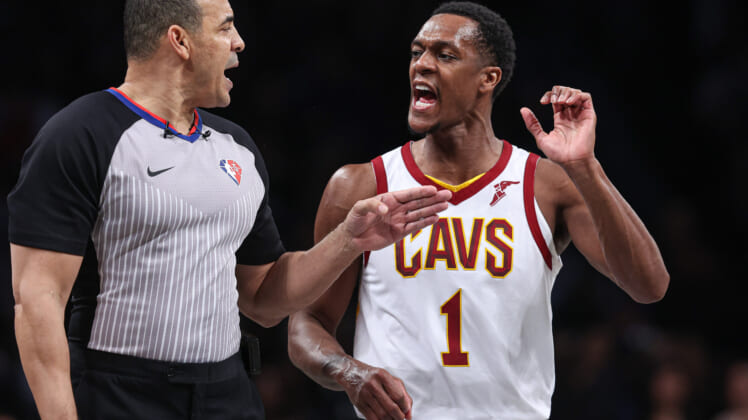 According to TMZ Sports, the mother of Rondo’s two children claims that he pulled a gun on her in front of the children and threatened to kill the woman.

According to the report, Rondo became enraged when the woman, 36-year-old Ashley Bachelor, asked their son to help fold the laundry while the young kid was playing video games with his father.

This is where the situation gets incredibly scary for Bachelor and the two children.

Rondo allegedly left the home for about 15 minutes before returning via the back door and started banging on the window with a gun. Bachelor claims that the veteran guard yelled “Go get my f**king son” while wielding the weapon. It wasn’t until Rondo’s parents arrived at the scene did he decide to leave.

Fearing for her life, Bachelor filed a protective order in Louisville last week — requesting protection from her, her son and daughter.

“I am extremely fearful for my safety and for the safety of my children. Rajon has a history of volatile, erratic, explosive behavior. He is verbally, emotionally, and financially abusive. He physically hits our son and calls him names like ‘p***y’ and accuses him of acting like a ‘bitch.'”

“Rajon verbally assaults our daughter. He calls her names like ‘thot, bitch, and d**khead.’ Rajon has made several threats on my life, saying at various times he will shoot me or shoot up my car.”

Said protective order was granted. At this point, there’s no criminal charges against Rondo and he isn’t a suspect in any criminal case. Even then, these are some serious allegations being levied against the veteran guard.

The 36-year-old Rajon Rondo entered the NBA as a first-round pick of the Boston Celtics back in 2006 out of Kentucky. He’s earned two NBA titles and four All-Star appearances since.

Last season, Rondo was initially a member of the Los Angeles Lakers before being traded to the Cleveland Cavaliers. for his career, he’s averaging 9.8 points and 7.9 assists. The veteran point guard is slated to become a free agent this summer.