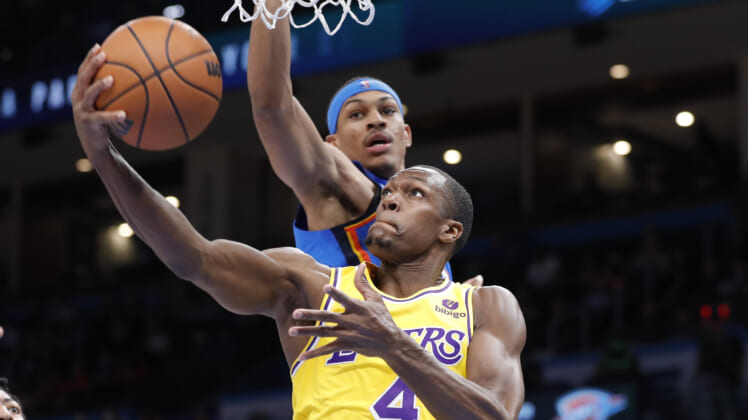 It was rumored on Thursday, Friday it’s official. With the Cleveland Cavaliers down to their last point guard after injuries to Collin Sexton and Ricky Rubio, they needed to add to their backcourt as soon as possible. Today, they struck a deal, trading for point guard Rajon Rondo from the Los Angeles Lakers.

According to Adrian Wojnarowski, the Cavs are sending the Lakers guard/forward Denzel Valentine to complete the trade for Rondo. The Lakers are expected to waive the partially-guaranteed contract of Valentine, creating an open roster spot for the team.

For the Cavs, Rondo provides a veteran presence who can step in and play right away. Rondo has always been a pest on defense and has an incredibly high basketball IQ, frequently calling out the opposing team’s sets during the game. His 16 years of NBA experience will no doubt come in handy for this young Cavs roster looking to reach the playoffs.

While Rondo is no longer the player who led the Association in assists per game as he’s done three times in his career, he may be the best option available for the Cavs without having to part with more integral parts of their rotation.

Valentine had played in 22 games so far this season with Cleveland, averaging just 9.3 minutes per game.

Rajon Rondo will have to clear the league’s health and safety protocols before he can help the Cavs. He was added to the list on Dec. 26, which should have him tracking to be available any day now. The Cavaliers’ next game is tonight, against the Atlanta Hawks, which Rondo won’t be able to suit up for.

Stepping in for the Cavs since the Rubio injury has been Kevin Pangos, a 29-year-old guard going through his first season in the NBA. Starting against the Washington Wizards, Pangos scored two points and dished six assists across 24 minutes of play.