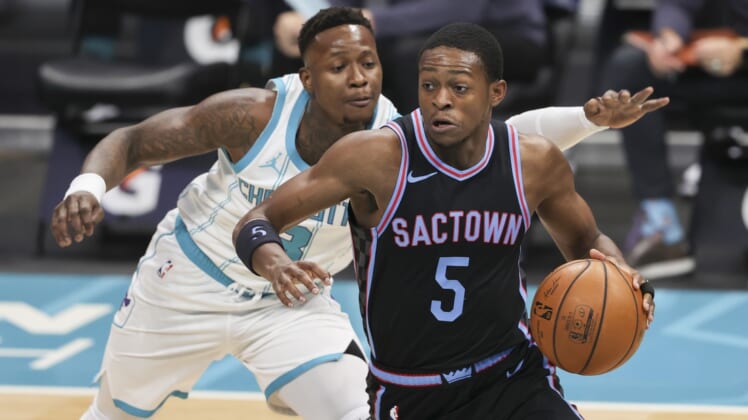 The Sacramento Kings begin the back half of a six-game road swing with a visit to the Boston Celtics on Friday.

The Kings rebounded from dropping the first two games of their Eastern Conference trek with a 121-119 defeat of Washington on Wednesday. De’Aaron Fox’s 28 points led Sacramento, including the game-winning jump shot just before the buzzer.

“We realize that we’re going to be pretty small out there to start,” Kings coach Luke Walton said in his postgame press conference. “We have to use other things to our advantage — our spacing, our passing, our playmaking.”

Sacramento’s small-ball starting five draws a Boston team without post player Tristan Thompson due to COVID-19 protocols. Kemba Walker was also out, as has been customary for the veteran guard in the second leg of back-to-backs.

In Walker’s absence, Jaylen Brown and Jayson Tatum combined for 57 points, but the Cleveland backcourt duo of Darius Garland and Collin Sexton responded with 54 points in the Cavs’ 117-110 victory on Wednesday.

With the Celtics languishing in the lower half of the Eastern Conference playoff standings, and falling to .500 after consecutive losses to Utah and Cleveland, trade rumors are unlikely to subside before the March 25 deadline.

“You’re cognizant of the human element that they’re all paying attention (to rumors),” Celtics coach Brad Stevens said in a press conference before Wednesday’s game. “Most of the guys have been through the rumor mill so often that they don’t pay it a lot of attention, or it doesn’t affect them.”

In the meantime, Boston aims to move back above .500 and avenge a loss it suffered last month. The Kings beat the Celtics in Sacramento on Feb. 3, 116-111. Fox scored 26 points, and Haliburton came off the bench with 21 points.

Walker did not play in that meeting, which came one night after a matchup with Golden State. He should be in the backcourt on Friday with Brown and Tatum, who are averaging almost 50 points per game combined.

Fox is Sacramento’s lone scorer above 20 points per game at 23.7. Hield and Barnes are both averaging more than 16 points per game, while Haliburton — whose start on Wednesday was just his third of the season — is averaging 12.7 points and a team-high 5.1 assists per game.

Sacramento comes into Boston averaging 115 points per game, good enough to rank in the NBA’s top 10, but has struggled defensively. The Kings are surrendering 120 points per game, second worst in the league through games played on Wednesday.

Robert Williams, who posted 13 points and 14 rebounds off the bench on Wednesday, could see a more prominent role down the stretch to help on the glass and defensively.

“I need to get him in there as much as possible,” Stevens said in his postgame press conference, adding he also should play 7-foot-5 center Tacko Fall more. “(Fall) is probably the other guy that could’ve impacted some of those rim shots better when Rob wasn’t in the game.”