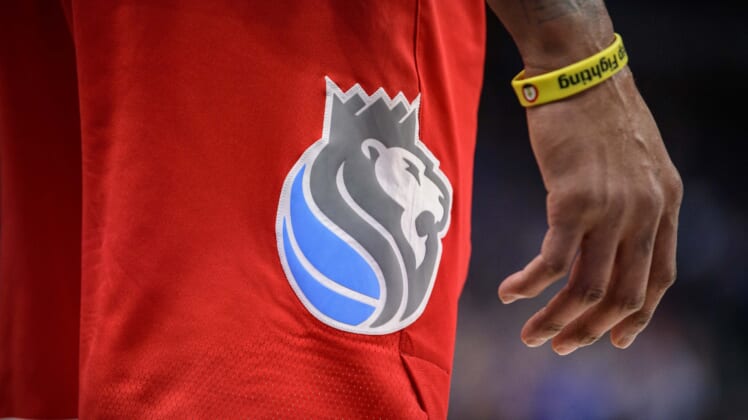 Feb 12, 2020; Dallas, Texas, USA; A view of the Sacramento Kings logo during the game between the Mavericks and the Kings at the American Airlines Center. Mandatory Credit: Jerome Miron-USA TODAY Sports

Sacramento Kings trade rumors are swirling with the NBA trade deadline approaching on March 25, with the club at a tipping point that could decide its future. Amid leaks about the future of coach Luke Walton and the organization’s staggering financial losses during the COVID-19 pandemic, Sacramento will be fascinating to watch in the next two weeks.

The addition of the play-in tournament before the NBA Playoffs creates an additional layer for the trade deadline. Ordinarily, teams sitting outside the top-10 seeds in a conference would be sellers and making moves for the future. Now, with the No. 9 and 10 seeds in each conference taking part in a play-in game, teams right on the outside are more inclined to stand pat rather than trading away key contributors.

Sacramento is in a particularly complex spot. Coming out of the All-Star Break, the Kings have the 13th-best winning percentage (.389) in the conference and they are 2-10 in their last 10 contests. As the team skids further down the NBA standings, the likes of Harrison Barnes, Nemanja Bjelica and Buddy Hield are generating interest around the league.

There’s plenty of incentive for Sacramento to keep Harrison Barnes. Not only is he playing like one of the better forwards in the Western Conference this season, but his veteran leadership in the locker room is integral for the Kings’ young roster. The Kings also don’t have a great history of success at small forward, so finding Barnes’ replacement isn’t a guarantee. All things considered, though, it’s in the Kings’ best interests to move their top asset.

Boston is the perfect trade partner for Sacramento. Thanks to the trade exception from the Gordon Hayward deal, the Celtics can take on Barnes’ salary without any issue. When he took over as Sacramento’s general manager, McNair emphasized the importance of financial flexibility and collecting assets. Trading Barnes removes his remaining $38.6 million salary over the next two seasons, money the Kings can use on younger talent.

Just as important, the Kings get a first-round pick and some intriguing young talent in this deal. Edwards could be a nice point guard behind De’Aaron Fox and is on a cheap contract. Meanwhile, Sacramento picks up a first-round pick in a strong 2021 NBA Draft class and two second-round selections. While trading Barnes won’t be easy for the team, a deal is best for everyone.

Bjelica will be on a different roster after the NBA trade deadline. The Miami Heat, Golden State Warriors, Philadelphia 76ers and Boston Celtics are among the teams interested in acquiring the stretch four. The 32-year-old forward has been used sporadically this season in Sacramento, alternating between playing 20-plus minutes and riding the bench. Given his specific skill set, three-point shooting, the interest from contenders isn’t surprising.

With so many teams wanting to acquire him, the Kings will get more than just a second-round pick. In fact, there will likely be multiple teams willing to package multiple second-round selections to acquire him. The Warriors are in a great spot to make the best offer. Golden State can likely offer a top-36 pick (via Minnesota Timberwolves) and a future second, plus salary filler, to land a shooter to pair with Stephen Curry. When the Kings trade Bjelica, this should be considered the ideal return.

Buddy Hield is much happier in Sacramento than he was a few months ago, but it won’t be long before he wants out. The Kings rewarded him with a four-year, $94 million contract extension after he exploded in the 2018-’19 season, averaging 20.7 points per game and making 42.7% of his shots from beyond the arc. He hasn’t been the same player since and his deal is a lot for an ownership group to pay, given their economic issues.

Fortunately, many other teams in the league aren’t having as many difficulties and would love to have a three-point marksman who is showing more effort on the defensive end. The Dallas Mavericks really want more shooting to put around Luka Doncic and pairing him with a 28-year-old Hield makes too much sense. Thanks to Tim Hardaway Jr.’s expiring contract, owed $18.975 million this season, Dallas can also ford to take on Hield’s money.

This decision should also be relatively easy for Sacramento. While it moves on from Hield’s talent, it acquires an unprotected 2022 first-round pick and frees up tons of money in future cap space. More importantly, breakout rookie Tyrese Haliburton can slide into the starting lineup. This Kings trade helps the team build for its future, built around Fox and Haliburton, while also putting them in a better position to increase their lottery odds to land an elite talent in a few months.

Could the Kings trade Marvin Bagley? It’s possible, but his value is at an all-time low. Ultimately, an offseason move is far more likely. With that in mind, our focus for Sacramento shifts to smaller deals. Both Hassan Whiteside and Cory Joseph will be gone within a month, potentially via buyout, but a trade for one of the two is very possible.

It’s not often the Kings trade with the Los Angeles Lakers, but it does happen. Los Angeles will be scouring the buyout market for talent, especially at center. But the Lakers also don’t want to run the risk of missing out on players, so trading for Whiteside might be the best move. McKinnie helps with the financial side of the deal, while a 2023 second-round pick means nothing for a team in win-now mode. As for Sacramento, it picks up a future pick for a player it would likely have bought out in a few weeks.