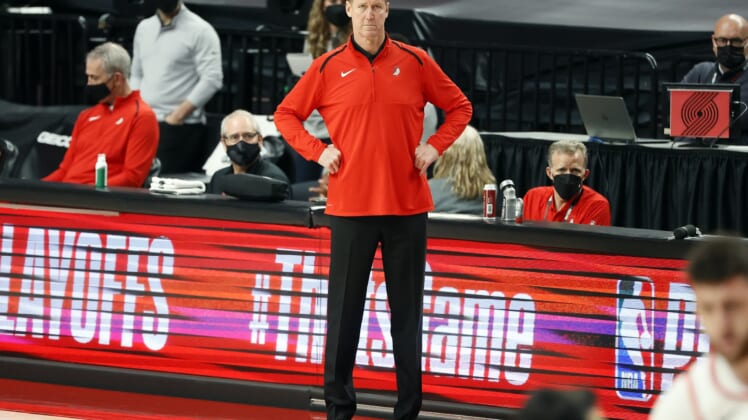 May 27, 2021; Portland, Oregon, USA; Portland Trail Blazers head coach Terry Stotts watches from the sideline during the first half of game three in the first round of the 2021 NBA Playoffs at Moda Center. Mandatory Credit: Soobum Im-USA TODAY Sports

A day after being knocked out of the NBA Playoffs, Portland Trail Blazers rumors are flying about the big changes that could be looming for one of the best teams in the Western Conference.

Facing the short-handed Denver Nuggets, Portland battled back to tie the series at two games apiece. But Denver made adjustments, finding ways to exploit the Trail Blazers’ defense and knock them out of the playoffs.

It marked the second consecutive season Portland was knocked out of the first round, the final straw for an organization with a small window.

According to Yahoo Sports’ Chris Haynes, coach Terry Stotts is expected to be fired soon. Meanwhile, even as he still has an office in the building, Portland is reportedly already giving strong consideration to Jason Kidd as its next coach.

Stotts, hired in 2012, had a solid nine-year run with the Trail Blazers. During his tenure, Portland reached the NBA Playoffs eight times. The team went as far as the 2018-’19 Western Conference Finals, but five exits in the first round was too much for a team with championship aspirations.

With so much pressure on the front office to get it right this summer, especially after Damian Lillard’s cryptic post, the Trail Blazers already seem to know who they want to replace Stotts.

Why Jason Kidd makes sense for the Portland Trail Blazers

Marquee NBA teams are always circling the waters at the smallest sign of a superstar becoming available. Unsurprisingly, per Stephen A. Smith, rival clubs are asking Portland about a Damian Lillard trade.

The 30-year-old star is signed through the 2023-’24 season and holds a $54.25 million player option the following year. But he is clearly tired of experiencing early playoff exits. Lillard has been extremely patient with the organization, but scoring 55 points in a 147-140 loss was also the latest sign that Portland hasn’t done nearly enough to surround him with talent.

Lillard will certainly listen to the front office this summer, hearing what their approach is for reshaping this roster to become a legitimate championship contender. The first step towards earning his trust that real change is coming would be firing Stotts.

After that move is made, it’s understandable why Kidd would be Portland’s top target. He has been one of the most popular coaching candidates in recent years with a resume and reputation that warrants the interest.

If there’s one coach who could really sell Lillard on a new vision in Portland, it’s Kidd. the Hall of Fame. Both men grew up in the Bay Area and are among the best players at the position during their eras.

According to Haynes, the Los Angeles Lakers are encouraging teams to hire Kidd. Since joining the club as an assistant coach, he has made a tremendous impact with his innovative ideas about the game, his leadership and the ease of communication with players.

Portland will face competition for Kidd. He will be interviewed by the Boston Celtics, who are conducting an extensive search for their next head coach. The opportunity to coach a historic franchise with two stars will be appealing, so the Portland Trail Blazers must be prepared to make Kidd one of the highest-paid coaches in the NBA.