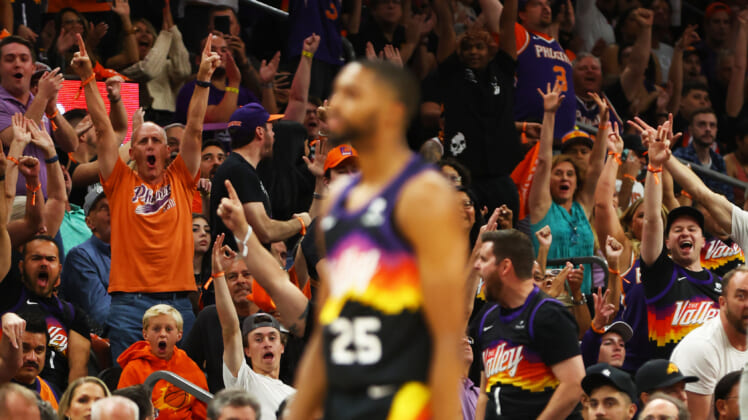 The Phoenix Suns were looking to punch their ticket to the Western Conference Finals Sunday evening at home.

Everything was set up well for Phoenix to win Game 7 at home against the Dallas Mavericks en route to a conference finals matchup against the Golden State Warriors.

That’s until the two sides actually took to the court inside Footprint Center in Phoenix. From the get, Luka Doncic and the Dallas Mavericks dominated throughout the first half.

Dallas held a 27-17 lead after the first 12 minutes with Doncic nearly tallying a double-double in the process.

It did not get any better for the Phoenix Suns in the second quarter with the NBA’s best team from the regular season scoring all of 10 points. By the time this game hit halftime, the Suns had found themselves down 57-27. You read that right. The defending Western Conference champions were down 30 points through 24 minutes.

How bad was it? Doncic matched the Suns’ entire point total in the first half. Reserve guard Spencer Dinwiddie had 21 points on four made threes for Dallas.

As for the Suns, it was absolutely humiliating. Devin Booker and Chris Paul combined to score three points on 0-of-11 shooting. How in the world does this even happen?

Fans who paid good money to hopefully root for their team to earn a trip to the NBA’s version of the Final 4 were not happy. In fact, we heard the Phoenix Suns booed by their own fans as the first half came to an end.

It’s hard to blame Suns fans for booing. That was one of the worst first-half performances we’ve seen from a team in the NBA Playoffs in some time.

It rivals what we saw from the Warriors in their Game 5 loss to the Memphis Grizzlies last week. The difference? This is a do-or-die Game 7 at home.

NBA world was not kind to Phoenix Suns first-half performance