It seems highly unlikely that three-time Pro Bowl tight end Zach Ertz of the Philadelphia Eagles will be back with the team next season.

Ertz, 30, has been subjected to trade rumors throughout the entire spring after finishing up shop on a career-worst 2020 season.

Now, with the Eagles’ offseason program getting going, Ertz has opted to remain away from the start of voluntary workouts on Monday. According to Jeff McLane of the Philadelphia Inquirer, the expectation is that he will not take part in any offseason activities until this situation is settled.

There was some talk of Ertz being moved during the 2021 NFL Draft. Unfortunately, Philadelphia was asking for too much in exchange for the high-priced veteran tight end.

Coming off a 2020 campaign in which he caught a mere 36 passes for 335 yards in 11 games, it appears that Ertz is a shell of his former self.

The Stanford product is also slated to count $12.72 million against the 2021 NFL salary cap, $8.5 million of which an acquiring team would be on the hook for. Needless to say, the Pro Bowl tight end will have to restructure his contract in order to facilitate a trade.

There’s also now a decent chance that Ertz is released outright. Philadelphia’s previous asking price in a trade is just too rich given the downtick in production we saw from the tight end in 2020.

With that said, Zach Ertz does have a recent track record of success. He combined for 204 receptions for 2,079 yards from 2018-19. Some contending team will have interest in that type of production. 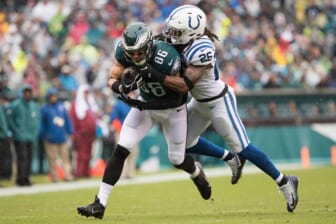 The Buffalo Bills could make a ton of sense. Their tight ends struggled big time during the 2020 season. Getting Josh Allen another weapon in the passing game could help Buffalo overtake the Kansas City Chiefs in the AFC. Meanwhile, the Seattle Seahawks could also make sense in the NFC.

This is certainly something to keep an eye on as offseason programs continue and the Ertz situation with Philadelphia remains unsettled.