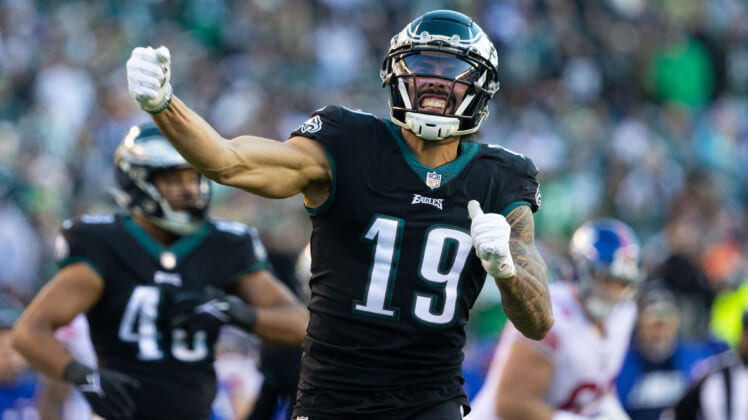 As all 32 NFL teams work to get from 90 players down to 85 by Tuesday’s cutdown date, we have a little bit of player movement, thanks to a Philadelphia Eagles trade. They’ve agreed to send wide receiver/tight end JJ Arcega-Whiteside to the Seattle Seahawks in exchange for safety Ugo Amadi according to Tom Pelissero.

Before Arcega-Whiteside became the 57th overall pick in the 2019 NFL Draft, he starred at Stanford, where he caught 63 passes for 1,059 yards and 14 touchdowns in his final season of college. Since he’s gotten to the NFL? He’s been like many other recent Howie Roseman wide receiver draft picks, in that he simply hasn’t panned out.

Arcega-Whiteside peaked as a rookie with 169 receiving yards and a touchdown, he’s yet to match or exceed these numbers in the two years since.

Hoping to stick around in what’s now a deeply-competitive field of pass-catchers, Arcega-Whiteside bulked up this offseason and was making the switch to tight end in Eagles camp. Obviously that plan hasn’t worked to perfection, with the Eagles now moving on.

But that’s OK, because the Eagles have managed to swap a player they were likely going to cut for a look at a safety, by getting Ugo Amadi back from the Seahawks. Amadi, 25, was also in the 2019 NFL Draft, only as a fourth-round pick, respectively.

He appeared in all 16 games as a rookie with the Seahawks, making 17 tackles and recovering a fumble. In his second season, Amadi started five games, tallied 54 tackles, a forced fumble, and deflected seven passes. But his third season, was his best yet. Amadi started seven games, got an interception, and racked up 54 tackles, a forced fumble and six deflected passes in 2021.

Amadi can play either safety or corner, but like Arcega-Whiteside, he too was on the fringe of making the roster for Seattle. We’ll see what his impact, if any, is like now that he’s in a new atmosphere. But he’ll have his own challenges, as now he needs to learn a whole new playbook without much time to go. He’s behind the eight-ball, competing with a whole new batch of athletes.

Related: Top NFL quarterback performances from Week 1 of the preseason