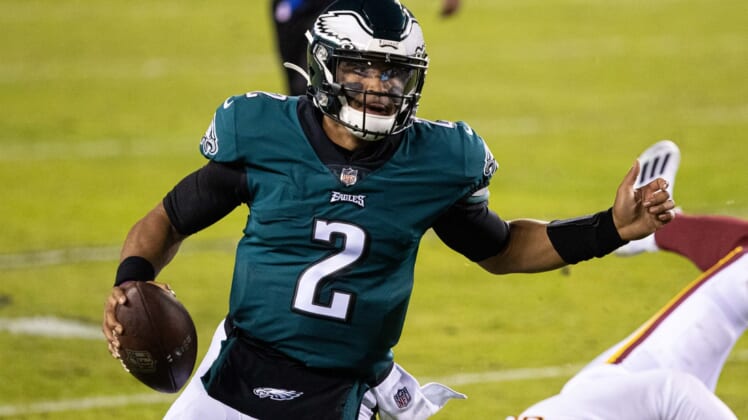 Philadelphia Eagles owner Jeffrey Lurie has instructed the team and new coach Nick Sirianni to make sure Jalen Hurts is ready to be the starting quarterback in 2021, ESPN reported Monday.

Lurie wants the team to build the quarterback room around Hurts rather than bring in QBs for an open competition, per the report.

Hurts will be the only quarterback under contract once Carson Wentz is officially moved to Indianapolis at the start of the league new year, March 17. The Eagles agreed to deal Wentz to the Colts last month for a third-round pick this year and a conditional second-round pick in 2022.

“I think it was just an opportunity for me,” Hurts told ESPN on Monday, his first public comments about the Wentz trade. “I think it shows the trust and what they think I can be as a player, so I wanna prove them right.”

The Eagles selected Hurts in the second round of the 2020 NFL Draft to back up Wentz. But when Wentz was ineffective in a Week 13 loss to the Green Bay Packers, Hurts replaced him and started the remaining four games of the season, going 1-3 in the role. On the season, Hurts completed 52 percent of his passes for 1,061 yards with six touchdowns and four interceptions.

The Eagles have the No. 6 pick in this year’s draft. They finished last season with a 4-11-1 record.