With Philadelphia Eagles starting left tackle Jordan Mailata dealing with an MCL sprain this week, it was believed that the former Rugby player would have a chance to still play in Monday night’s game against the Dallas Cowboys. But not anymore.

On Saturday, Eagles head coach Nick Sirianni revealed that Mailata will not suit up for the upcoming Monday Night Football contest. The good news is, Mailata won’t be going on injured reserve. Had he been placed onto IR, he would have to miss a minimum of three games, now his chances to suit up next week against the Kansas City Chiefs remains alive.

Mailata, who recently signed a contract extension with the Eagles, has started 12 games since being a seventh-round selection in 2018. Across two starts and 129 snaps this season, Mailata has graded very well at 85.6, per Pro Football Focus. Not having Mailata could be a significant loss for the Eagles. 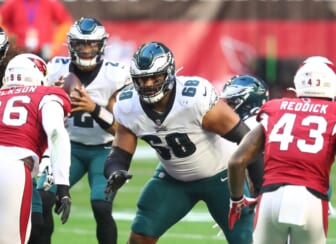 Left tackle Andre Dillard is expected to replace Mailata in the starting lineup, which could spell trouble for Jalen Hurts. Dillard, a 2019 first-round pick, has not exactly panned out, playing just 18 games since being selected 22nd overall.

In 337 offensive snaps in 2019, PFF graded Dillard with a putrid 59.7 score. Unfortunately, Dillard wasn’t able to get more experience in 2020 after missing the entire season with a torn biceps. Dillard has played just two snaps so far in 2021 but now will be asked to step up in a big way, starting Monday night against the Cowboys.

Both the Eagles and the Cowboys are off to a 1-1 start, as they battle in the NFC East division. Philadelphia will have to hope the loss of Mailata doesn’t set them back too much going forward.