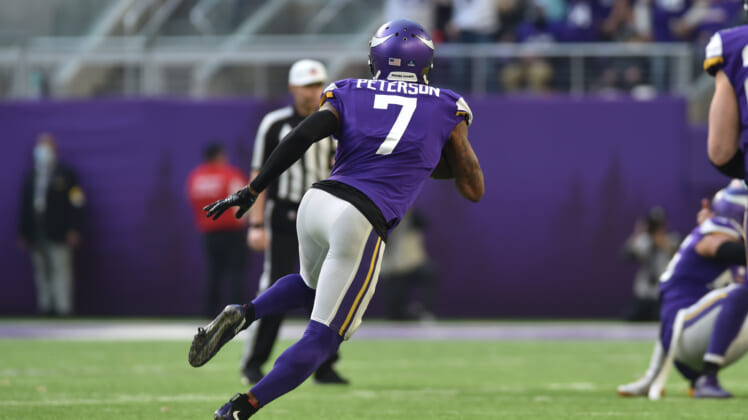 After 10 seasons in the desert with the Arizona Cardinals, it appears eight-time Pro Bowl cornerback Patrick Peterson enjoyed spending 2021 with the Minnesota Vikings, and no, it wasn’t because of Mike Zimmer’s ability to get a few extra years out of aging cornerbacks.

Peterson headed into the offseason as an unrestricted free agent after signing a one-year deal in 2020. Yet, the three-time All Pro corner was steadfast all along in his desire to play yet another season in purple and gold after becoming a star with the LSU Tigers.

Wanting to build the intrigue and announce which team he’d suit up for in 2022 on his “All Things Covered” podcast, Peterson finally ended the suspense. Peterson is returning to the Minnesota Vikings for another season, where he’ll resume his role as the team’s top cornerback.

Related: Minnesota Vikings: Evaluating the importance of a great quarterback and how it relates to Kirk Cousins

What Patrick Peterson’s return means for Minnesota Vikings in 2022

Retaining Patrick Peterson in Minnesota is a huge signing. It may seem wild to some, but even at the age of 31, P2 was still an effective player across 13 starts in 2021, where he allowed the lowest completion rate of his career since Pro Football Reference started charting the stat in 2018.

Arguably the top remaining need for general manager Kwesi Adofo-Mensah to address was finding another starting cornerback to play opposite of Cameron Dantzler to go along with likely new nickel back Chandon Sullivan.

Peterson also drew interest from a few teams who made the playoffs last season, with the Dallas Cowboys, Buffalo Bills and Kansas City Chiefs reaching out to him, in addition to the Washington Commanders, Indianapolis Colts and the division-rival Chicago Bears. He also notes a desire to play two more seasons after this one-year deal is done in 2023. While the contract details have yet to be revealed, P2 said he’s “not trying to back up the Brink’s truck anymore”.

While Peterson may not have ever been worried or confused about where he wanted to play in 2022, plenty of Vikings fans were concerned they’d have to enter the draft practically desperate for a top corner to be on the board at pick No. 12. Now, they can enter the player selection process with an ideal approach, which is to take the best player available.

Even the freshly-signed Patrick Peterson admits the Vikings could draft, and he believes, will draft a cornerback in April. One player in particular who stands out to him is a top-rated cornerback prospect and fellow LSU alum Derek Stingley Jr., who P2 said reminds him of himself at a younger age.

With the Vikings bringing back secondary coach Daronte Jones, from LSU to be their defensive backs coach in 2021, the organization likely already has all the information they could dream for about Stingley heading into the draft.

Anyway, count Peterson as the latest one aboard the Vikings ship who’s down to add a top cornerback from the 2022 NFL draft class.