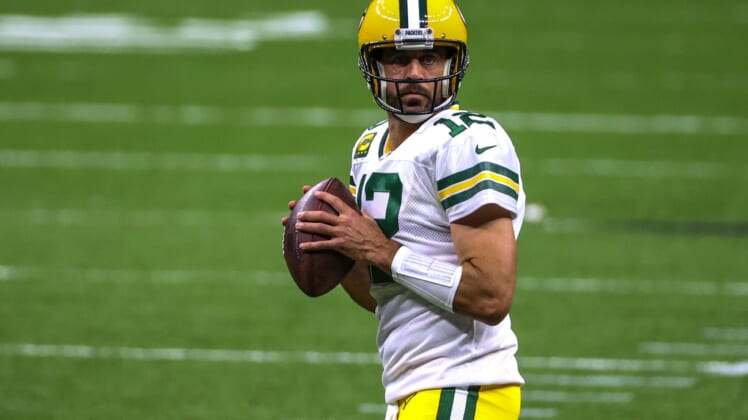 Green Bay Packers quarterback Aaron Rodgers is coming off yet another brilliant performance in a 30-16 win over the hapless Atlanta Falcons. Rodgers threw four more touchdowns compared to zero interceptions and has his Packers at 4-0 heading into their Week 5 bye.

Not everything is roses with the Packers. Following their blowout win over Atlanta, Rodgers used part of his post-game press conference to complain about the NFL’s COVID-19 policy, which requires that he remains in Green Bay during the bye week.

Aaron Rodgers not happy about having to remain in Green Bay

“It sucks, it totally sucks. Obviously it is what it is, especially as an older player, I look forward to the bye weeks. It is what it is, we’ll be here, we’ll make the most of it but it sucks,” Rodgers said, via Rob Demovsky of ESPN.

Typically, players return to their off-season homes or go on vacation with their families during the bye week. It’s one week out of over five months when they are able to forget about football for a bit.

Given the ongoing pandemic, that’s not going to be the case this season. As for COVID-19, cases have surged in the Green Bay area over the past week or so. Whether that plays a role in Rodgers’ thought process remains to be seen.

To say that the NFL is taking this pandemic seriously would be an understatement. Just this past week, the league saw two games postponed after multiple positive COVID-19 tests. That included former NFL MVP Cam Newton and over two dozen members of the Tennessee Titans organization.

The league has also handed out substantive penalties to the Las Vegas Raiders for breaking NFL-mandated COVID-19 protocols over the first few weeks of the season.

Rodgers is going to have to hunker down and take this in stride. He’s not the only one dealing with it.