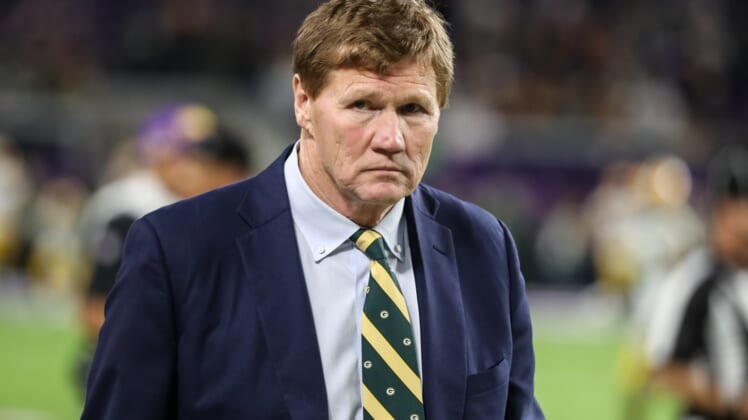 Green Bay president and CEO Mark Murphy confirmed the Packers’ commitment to quarterback Aaron Rodgers on Saturday in his monthly column published on the team website.

His reassurance to Packers fans followed Thursday’s reports that Rodgers is upset with the team and doesn’t want to return to Green Bay for the 2021 season.

“When a report like that involves the reigning MVP, it is obviously a huge story, and it dominated the sports news for most of the day,” Murphy wrote. “This is an issue that we have been working on for several months.”

Murphy said general manager Brian Gutekunst, head coach Matt LaFleur and himself have flown out on several occasions to meet with Rodgers this offseason.

“We are very much aware of Aaron’s concerns and have been working with him (and his agent Dave Dunn) to resolve them,” Murphy wrote. “We remain committed to Aaron in 2021 and beyond. He is not only a tremendously talented player, but has developed into a true leader for us. The relationship that Aaron has forged with Matt and the other offensive coaches has propelled us to the brink of the Super Bowl in two straight years. We look forward to competing for another Super Bowl championship with Aaron as our leader.”

Rodgers, 37, has played for the Packers for his entire NFL career, leading Green Bay to victory in Super Bowl XLV and winning three MVP awards.

Reports and rumors have indicated that Rodgers has felt disgruntled dating back to the 2020 draft when the Packers traded up to select a quarterback, Jordan Love, in the first round rather than add an offensive player who could help right away.

Thursday likely did nothing to heal those wounds. Rather than select a wide receiver, tight end or a replacement for All-Pro center Corey Linsley — who signed with the San Diego Chargers in free agency — the Packers drafted Georgia cornerback Eric Stokes.

Rodgers is under contract through 2023, with a potential out in his deal before the 2022 season.

He owns a 126-63-1 record as a starter with Green Bay and ranks seventh all-time in touchdown passes (412) and 11th in passing yards (51,245). Rodgers won his third MVP award last season after leading the NFL in completion percentage (70.7) and touchdown passes (48) and guiding the Packers to the No. 1 seed in the NFC.