Tampa Bay wide receiver Antonio Brown made an appearance at practice Wednesday on a crutch and coach Bruce Arians said there is no timetable for his return from an ankle sprain.

Arians said the sprain is near Brown’s heel. He was asked if Brown might be able to return after the team’s bye in Week 9.

However, tight end Rob Gronkowski was back on the practice field in pads amid reports he’ll be ready to play this Sunday. Gronkowski has missed the past four weeks with cracked ribs and a punctured lung. He has 16 catches for 184 yards and four TDs. 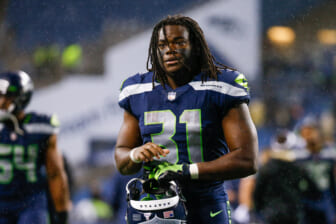 Brown missed last Sunday’s game against Chicago after sustaining the injury during the Buccaneers’ victory over the Philadelphia Eagles on Oct. 14.

Brown has 29 receptions for 418 yards and four touchdowns.