WATCH: No. 22 Miami Hurricanes escape with win over Appalachian St. 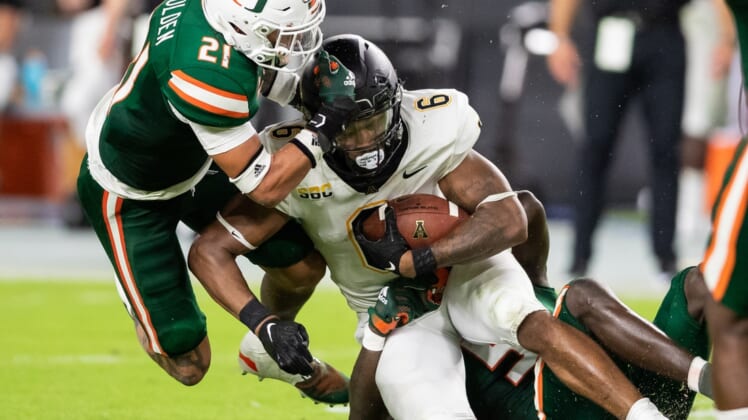 The Hurricanes (1-1), favored by eight points, were hurt by their special teams, allowing a 100-yard kickoff return. They also had a field goal blocked.

Appalachian State (1-1) fell short of what would’ve been its biggest upset since winning at Michigan in 2007. The Mountaineers also beat North Carolina in 2019.

The Mountaineers had a chance to drive for a winning field goal in the final two minutes, but they were stopped at their own 47 as Chase Brice threw incomplete on 4th-and-six.

Miami quarterback D’Eriq King completed 20-of-33 passes for 200 yards and ran for 79 yards. Miami running back Cam’Ron Harris ran for 91 yards (5.1 average) and one score.

Miami’s defense led to the game’s first score as defensive back Amari Carter intercepted a Brice pass at the Mountaineers’ six. The pass was deflected by defensive end Chantz Williams, and that led to Donald Chaney Jr.’s one-yard TD run.

The Mountaineers tied the score 7-7 on a 4th-and-two gamble that turned into Camerun Peoples’ 28-yard TD run, virtually untouched up the middle.

Miami closed the first quarter with a 9-7 lead as a high snap to the Mountaineers punter led to a safety.

The Canes settled for Borregales’ 27-yard field goal and a 12-7 second-quarter lead.

But a 100-yard kickoff return by Jalen Virgil down the right sideline gave the Mountaineers a 14-12 lead just 13 seconds later.

The Mountaineers then made another big second-quarter play, blocking a Borregales 35-yard field goal attempt.

Miami took the second-half kickoff and went 75 yards on six plays, capped by Harris’ 12-yard run for a 19-14 Canes lead.

The teams traded field goals — 22 yards for the Mountaineers’ Chandler Staton and 38 yards for Borregales — leaving Miami with a 22-17 lead with 9:15 left in the fourth.

Appalachian State took a 23-22 lead on Malik Williams’ three-yard reception with 5:48 left in the fourth. Williams had a 41-yarder to set up that score.

That set the stage for Miami’s final drive — a 10-play, 55-yard march that resulted in Borregales’ clutch field goal.