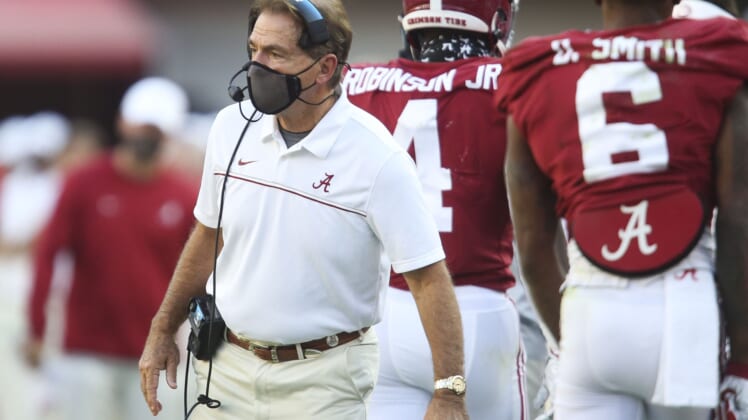 Alabama Crimson Tide head coach Nick Saban experienced a major scare this week after testing positive for COVID-19, but the iconic college football coach will be ready for Saturday’s game against Georgia.

Saban, who tested positive for COVID-19 on Wednesday, spent the past three days in isolation. With the days ticking down until the highly-anticipated SEC clash against the Bulldogs, many feared Alabama’s coach would be sidelined.

Following Saban’s positive test, the 68-year-old coach isolated himself and coached the team during practice through Zoom conferences. However, there was a small window for the top college coach to meet the SEC’s requirements that would allow him to return for Week 7.

Alabama, one of the few college football programs to do daily COVID-19 testing, quickly learned Saban’s positive test avoided didn’t impact the roster. With the game against Georgia not in jeopardy, the program’s next hope became Saban returning to the sideline on Saturday.

He underwent his first PCR test on Thursday, which provided negative results. However, he would need consecutive negative results on Friday and Saturday morning to receive clearance from the SEC. Once he received another negative result Friday, things were trending in the right direction.

On Saturday morning, Alabama announced that Saban’s third COVID-19 test came back negative. As a result, he will be allowed to coach from the sidelines on Saturday night against the Bulldogs. It also means his results on Wednesday will be designated as a false positive.

It’s fantastic news for the Crimson Tide, who will be looking to maintain their recent stretch of dominance against their rival. With Saban on the sideline, Alabama’s fans also won’t have an excuse to point to if Georgia pulls off the upset on national television.