Nick Saban could return to sideline for Alabama-Georgia game? 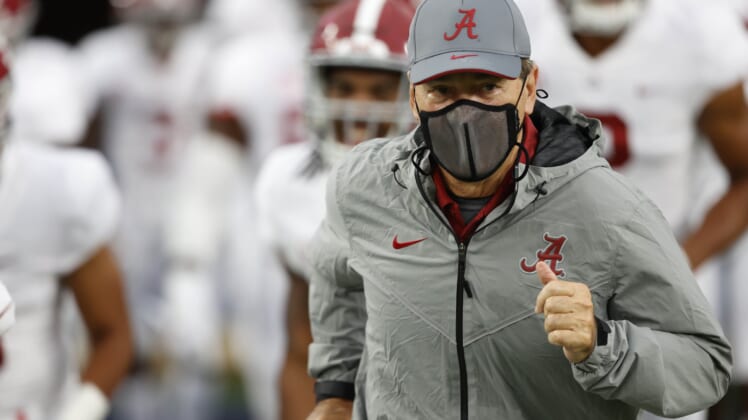 Just days after Nick Saban tested positive for COVID-19, the legendary head coach could be on the verge of returning to the sideline for Saturday’s clash between the Alabama Crimson Tide and Georgia Bulldogs.

Saban tested positive for the coronavirus on Wednesday, putting his availability and the iconic SEC rivalry in serious jeopardy for Week 7. Fortunately, the biggest college football game of the 2020 season remains on schedule and Saban might be joining his players on the sideline.

Will Alabama HC Nick Saban coach in Week 7 vs. Georgia?

When Saban first tested positive for COVID-19, the expectation was he would miss Saturday’s game against the Georgia Bulldogs. While the 68-year-old coach was asymptomatic, there was limited time for him to meet the requirements to be cleared for a return to the sideline.

Fortunately for the Crimson Tide, things are trending in the right direction. Alabama announced Friday afternoon that Saban remains asymptomatic and he has twice received negatives during his PCR tests. In order to return, he will need to pass a third PCR test for full clearance.

Saban will undergo the third test on Saturday, which will determine if he can join Alabama’s sideline against Georgia. If the test determines he is still carrying the coronavirus, deemed a positive result, he will not be allowed on the sideline nor will rules permit him to call plays or dictate anything to his coaching staff during the game.

In that event, offensive coordinator and quarterbacks coach Steve Sarkisian would step in. The 46-year-old offers plenty of head coaching experiencing, serving in that role for the Washington Huskies (2009-’13) and USC Trojans (2014-’15). He joined Saban’s coaching staff in 2016 as an offensive analyst, before joining the Atlanta Falcons in 2017 then returning to Alabama in 2019.

If Saban’s third test comes back negative, his initial positive test will be classified as a false positive. In that instance, he would be allowed to coach the Crimson Tide for their primetime game against Georgia.